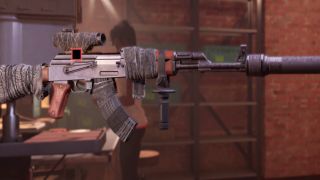 The stats for the Merciless Exotic Rifle are actually less important than other weapons because of it's unique way of firing. With that said, it's a rifle so you know it's single shot and has an RPM of 260, along with a 30 round magazine. Obtaining it in World Tier 4 means it has a damage of around 16k and like all Exotics, has a +15% Critical Hit Damage buff. Here are the three Merciless talents:

This is a system similar to ones found in games like Anthem and Mass Effect, and can cause some serious damage if you trigger five primers simultaneously. We haven't got our hands on it ourselves yet so we can't vouch for how effective it is, but it sounds like it could easily become one of the best guns in The Division 2. But how do you get it?

How to get the Merciless Exotic Rifle in The Division 2

Obtaining the Merciless in The Division 2 is different to most of the other Exotics, because you have to rely on random drops a lot more, rather than guaranteed drops from tough enemies. It's a Hyena weapon so the way you get the Merciless is by killing Hyena bosses. It's possible to obtain the Merciless on normal difficulty, but we'd recommend repeating Hyena missions on Hard or Challenging to increase the number of drops you get.

As for which missions are eligible, we'd recommend trying the Jefferson Trade Center and Bank Headquarters missions. There's also a chance you can get it from Daily VIP missions, but you can run and become more familiar with the standard missions available so your best bet will be repeating those.

That's all you need to do! Keep killing Hyena bosses until the Merciless rifle drops then when you get it, you're in possession of a gun that can deal over 1.2 million damage at a time.

Make sure you get some sweet Division 2 dyes to bling it out with your apparel!