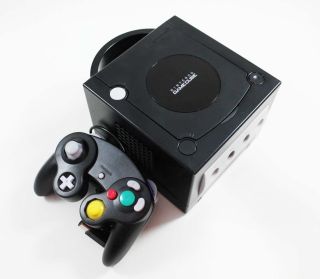 Despite a stellar lineup of games and plenty of nostalgic fans waiting to pick one up, Nintendo has yet to announce a smaller, classic version of the GameCube. A YouTuber named Madmorda decided to fill that hole themself by creating the world's smallest GameCube, their own Classic version of the cube console.

"It's a fully functional console built to scale with the original GameCube and the tiny GameCube controller I built last year," she said in the video. "This is not an emulator or a GameCube motherboard, it's a Nintendo Wii motherboard that I trimmed down to about the size of a Gameboy color cartridge."

This fan-made take on a  GameCube classic includes functional headphone jacks that work with GameCube controllers through a converter and two USB slots where the consoles memory card slots are. It also features a functional power button and light that operate similarly to the original GameCube. The YouTuber showed off the mini console by playing Super Mario Sunshine, one of the best platformers of all time.

Madmorda's been creating custom hardware like this for the past three years on their YouTube channel. A portable Gamecube and Pokédex-style Gameboy are two highlights worth checking out. You can check out more details from Madmorda's mini GameCube build with her writeup on the BitBuilt forums.

You'd think that the success of the NES Classic and SNES Classic would push Nintendo to replicate their success with an N64 and GameCube classic, but here we are. Maybe showcases of passionate fandom like this will convince them otherwise.

Getting a GameCube Classic is one thing, figuring out what games should be included on it is another. Check out our list of the best games with everything from Super Mario Strikers to Paper Mario: The Thousand Year Door.