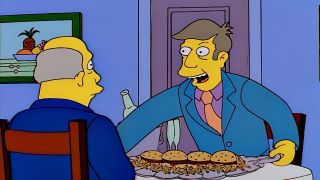 Steamed Hams, the ever-popular meme from the golden age of The Simpsons, will be back on the menu later this year for a season 32 episode. May you see it? No. Not yet, anyway.

Speaking at the Television Critics’ Association (via SlashFilm), executive producer Matt Selman opened up about the autumn’s slate of episodes, including one “that’s basically just a [Principal Skinner and Superintendent Chalmers] road trip show because we know those characters can sustain. Their own relationship is so interesting and compelling and fucked up that we could do that. I’m always on the lookout for that kind of thing.”

But when you put Skinner and Chalmers together, minds inevitably drift elsewhere to the three-minute Steamed Hams clip from the season 7 episode “22 Short Films About Springfield.”

The absurd sketch saw Skinner pass off a slap-up meal from Krusty Burger as his own home cooking. It saw a latter-day revival that has spread like wildfire (or was it just the Northern Lights?) across the internet in recent years. Selman is happy to announce that it’s returning.

“The Steamed Hams will make an appearance,” Selman confirms, but cautions against it being the focus of the adventure: “We don’t want to try to overcapitalize on the Steamed Hams because then it seems like we’re desperate to try to take old internet passion and feed off of it. It’s more I would say in an Easter egg area. Easter ham. Right? Everyone loves Easter hams.”

While nothing will surely ever spoil the Steamed Hams magic, let’s hope this will be a perfectly cromulent comeback rather than something resembling reheated leftovers. We’ll find out when the episode airs this Fall.

Mmm… listicles. Join us as we rank the best Simpsons episodes ever.