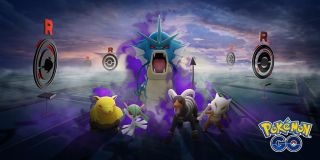 What are Pokemon Go shadow Pokemon?

Shadow Pokemon in Pokemon Go are some Pokemon that Team Rocket have brought with them. Whenever you defeat a Team Rocket GO Grunt at a pokestop they've taken over, you'll have the opportunity to catch a shadow Pokemon that they've left behind. They're easily distinguishable due to the purple aura around them, red eyes, and when you catch them, you'll notice that their CP is significantly lower than you'd expect.

This is because when you catch a shadow Pokemon, you've got the option of spending a few candy and stardust to purify it. This will increase each IV stat by two and raise the CP considerably, making it a much more formidable fighter. You could also keep it as a shadow Pokemon though, because like I said before... they look badass.

Here's the complete list of all Pokemon Go shadow Pokemon in order of their Pokemon Go Pokedex number, along with all of their evolutions. Note: you can only catch the base Pokemon as a shadow type in this table, and then you can evolve it into the higher types.

We'll continue to update this list whenever new shadow Pokemon are released and until then, get out there and save those Pokemon!