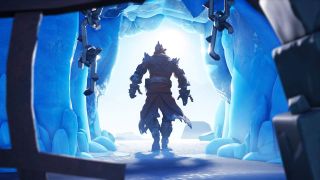 We're getting into the final days of Fortnite Season 7 now, which means you don't have much time left to complete any outstanding Fortnite Snowfall Challenges, along with the new Fortnite Overtime Challenges. As has been the process all season, Snowfall Challenges are earned by completing all of the Fortnite Battle Pass Challenges for each week. If you're familiar with these sorts of challenges, then here's what you need to know about them - for every week in which you clear all seven of the Battle Pass Challenges, you'll unlock a fresh loading screen that features a hidden clue. If you decipher where that clue is indicating and go to the area it suggests, you'll find either some secret Battle Stars or a Banner as your reward.

Remember that you have to complete Snowfall Challenges for the relevant number of weeks and unlock the specific loading screen before the hidden reward will appear, so don't just rush off to the locations detailed in this guide before you've put in the effort or you'll come up empty-handed.

There's been a big change this season to how the Snowfall Challenges rewards unlock, which should make it easier for players to get the exclusive skin. This time around, you need to complete a total of 60 Weekly Challenges in order to unlock the legendary outfit, rather than having to complete all of the challenges for a certain number of weeks. Complete all of the challenges from all ten weeks and you'll also receive the reward item, which is a Season 7 snowflake banner.

By completing 60 of the weekly challenges in total, you'll unlock The Prisoner outfit and corresponding back bling. Although files found in recent leaks suggest there are four unlockable stages to this skin, there's no indication within the game of how to actually get them. We have a separate guide for how to unlock the Fortnite Prisoner stages, so keep an eye on that for the latest updates.

If you've managed to beat all ten weeks of Snowfall Challenges then this loading screen is yours, showing The Prisoner hanging out in the desert biome with some of his chains removed. If you look down towards the edge of the desert you can spot a secret banner hovering under the tree, so that's where you want to go first.

If you approach from the desert biome, you should be able to spot the tree in question just beyond the small building with the sloped roof. It's big enough to be visible on the map, if you need to set yourself a marker to aim for.

Once you approach the tree, the Banner should appear for your to grab. If it doesn't immediately pop up at ground level, then build a ramp up by the tree trunk to make sure you're in the right place. From here, the racetrack is a good place to stock up on resources, before heading into the Lonely Lodge woods.

If you've polished off nine weeks of Snowfall Challenges you'll receive this loading screen, featuring The Prisoner walking away from their now broken chains, and on the wall to the side is a drawing of where to locate the Fortnite Week 9 Secret Battle Star. If you can't make it out, it shows the star hovering over a sled - this refers to the giant wooden sled which can be found to the southeast of Polar Peak, so head in that direction.

You'll find the giant wooden sled in grid D8, to the south of Shifty Shafts by a small group of buildings, which may be familiar as the previous location of a giant wooden chair. The sled sits just to the west of the buildings, and shouldn't be hard to spot as you approach the area.

To get on top of the giant wooden sled you can either land on it, go up one of the ramps at the front, or build up to it of course. When you're there, take a quick look around and the hidden Battle Star will appear somewhere near the middle of it for collection.

Once you rack up eight weeks of Snowfall Challenges, you'll get this loading screen featuring The Ice King again. This time he's on top of his castle surveying the rest of the island, but look closely at the wall by his feet and you'll find the cryptic clue for where to find the Fortnite Week 8 Secret Banner. Rather than showing where the banner will appear, it instead has coordinates for where you need to look - A8, A9, B8, B9. These four grid sectors cross over south of Frosty Flights, so that's your next location.

If you glide in from the south of Frosty Flights, approaching towards the frozen archway, you should be able to make out a bare patch of ground in the snow that corresponds with where map grids A8, A9, B8, B9 all intersect - aim for that.

As you approach the patch of bare earth, the Banner will appear for collection. Once you've grabbed it you then have the choice of either sprinting north to Frosty Flights to try and steal a plane, or heading southeast towards Happy Hamlet which is less likely to be full of opponents.

If you've taken care of the Snowfall Challenges for seven weeks then this loading screen is yours, showing The Ice King sitting menacingly on his frozen throne, and the Fortnite Week 7 Secret Battle Star poking out from the side. You may not have seen this in-game before, as it's a fairly recent addition to the map. To start your search, head towards Polar Peak in the snow biome.

On the main Polar Peak mountain, just north of the Polar Peak lettering on the map, you'll find the Ice King's castle. It's big enough to be marked on the map, so shouldn't be too difficult to locate. The entrance is at the south end of the castle, so head in there.

Inside the Ice King's castle, proceed through the first archway then go up the middle stairs in front of you. This will bring you into the main hall, and if you follow the pillars and torches ahead they'll take you right to the throne. Inspect the ice crystals poking out to the left and the hidden Battle Star will pop up.

Beat six different week's worth of Snowfall Challenges and you'll receive this loading screen, showing a character enjoying a snack in a Durrr Burger onesie - something you can actually buy IRL in space year 2019. Pay attention to the chalk board display in the corner, as this reveals the secret Banner location - if it looks familiar, that's because it featured in the Week 1 challenge to dance on top of a crown of RV's. Get started by heading to the south coast of Paradise Palms.

Aim for the southernmost mountain in the desert biome, and you should see a circle of vehicles embedded on top of it, so try to drop into the middle of that.

There's normally a chest in the middle of the stranded vehicles, so you can grab that loot as well as the hidden Banner which will appear in this location.

Wrap up five weeks of Snowfall Challenges to unlock this loading screen, showing Trog's secret ice cave somewhere in the ice biome. As you can see, this ice cave features a teddy filled shack and a dining table - Trog the Yeti has made a nice hidden place to lay low from enemies. Also, that penguin is adorable! To get started, head to the southwest corner of the island.

There are two different ways to get in to Trog's secret ice cave - either drop through the hole in the roof within the circle of trees, or go through the main opening down below.

Once inside Trog's hideout, head to the roof of the shack inside and the hidden Battle Star will appear next to the mattress. To get out of this location, simply head through the opening towards to ocean and you’ll be greeted with a couple of ziplines and a plane to make your escape.

Tick off Snowfall Challenges in four different weeks and this loading screen is yours, showing a character riding one of the currently delayed Fortnite Driftboards and a Banner marked on the wall of a building. If you don't recognise the area in the background, it's one of the new locations found in the ice biome named Happy Hamlet, so head there.

If you approach from the east, you can spot the tall narrow building you're looking for in the northeast corner of the location next to Big Shots Espresso, just north of the clock tower.

You'll need to build up two ramps to reach the correct height, then head on up to collect your hidden Banner when it appears.

Finish the Snowfall Challenge for a third week to collect this festive loading screen, featuring Santa's cyborg elves filling planes with presents. Inspect the hangar in the background and you should be able to see a hidden Battle Star sat on top of some racking, so make your way to Frosty Flights once again.

Approach over the runway, and look for the hangar to your left as you glide in.

Go inside the hangar and approach the shelves on the left-hand side, where the hidden Battle Stars will appear. Probably best to hop in a plane and get out of there as soon as you've collected them.

Complete Snowfall Challenges for two weeks and you'll get this loading screen, featuring new character Lynx working at a bank of computers - one of which has a Banner on the screen. To find this location, we need to head over to Frosty Flights once again...

Glide towards the landing strip, then aim for the most eastern of the red buildings near to it.

Head inside then go up the stairs to the next floor, where you'll find the workstation pictured previously. Approach it and the Banner should appear, so collect it then sweep the building as there are a ton of chests to be found here.

Beat the Snowfall Challenge for one week to receive this loading screen, showing new character Zenith riding a zipline. Look in the background and you'll spot a hidden Battle Star hovering over a submarine (!) perched on a mountain. If you completed the Week 1 challenges you'll have danced on top of it already, so head to the area southeast of Frosty Flights.

As you glide in over the frozen area, you'll spot the out of place submarine toward the airfield.

The hidden Battle Stars will appear when you land on top of the sub, so grab them and get out of there fast - between other players and planes flying around, this is a real danger zone!

Want to take a break from all the challenges? Then find out how Fortnite’s spectator cam messes with your brain to make you like your enemies.

Iain is better known to many as ‘Mr Trophy’, due to his slightly unhealthy obsession with amassing intangible PlayStation silverware, and he now has over 100 Platinum pots in his virtual award cabinet. He does not care for Xbox Achievements.
See comments