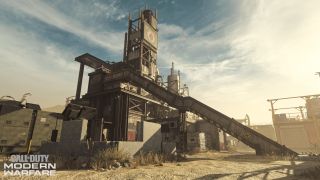 Modern Warfare season 2 maps are here but what do they add? Coming up we've a look at Rust, Atlas Superstore, Zhokov Boneyard and Bazaar. The first two are normal, straightforward maps, while the last two are for Ground War and Gunfight respectively.

We've also got a list of all the maps in the game so far but for now let's focus on the new Modern Warfare season 2 maps, Rust, Atlas Superstore, Zhokov Boneyard and Bazaar - including the best tactics, perks and play styles for success.

A fan favorite from the original Modern Warfare 2, Rust is a small map that creates frantic, fast battles. If you've never played it before then you want to get to grips with it's verticality as soon as possible. It's a tiny space but has higher areas that can dominate the fight if a good player gets in position - something that will take a careful approach and covering fire, as those ladders are exposed. There are also lower areas where you can catch people out from below. Because it's a confined space, perks like Shrapnel for an extra grenade to throw will be handy. While E.O.D and Battle Hardened will help you survive explosion and non-lethals coming the other way.

Atlas Superstore is a new map based on the Verdansk area of the single player campaign. It's full of exposed spaces, and smaller side areas branching off from the main warehouse section. As a result it's a mix of large open areas, smaller rooms and long corridors. As a result Overkill is a good perk to pack so you can bring two different range options. There's also a lot of height potential - both spawn areas have direct access to good overlook points - as well as sight lines through shelves. Although, despite plenty of holes, Killsteaks can be hampered by the roofs.

Built for 32v32 Ground War matches, Zhokov Boneyard is basically a remake of Scrapyard from Modern Warfare 2. Described as "a large sprawling airplane junkyard" its a mess of broken sight lines and cover. It's also built for vehicles so expect chaos on wheels. Overkill will be handy to give you some range options while perks like Cold-Blooded and Ghost will help keep you hidden. Tracker could help you locate enemies and avoid surprises.

Bazaar is a gunfight map inspired by the war torn streets of Urzikstan. Like all the 2v2 maps it's a tight space balancing a large open space with scant cover, to promote fast and final combat with the opposition.

These maps can be found in the core playlists across modes like Team Deathmatch, Domination, Cyber Attack, and more. Some of the larger maps are exclusive to specific modes however, like the 20 players Team Deathmatch and Domination playlists.

All of the above maps can be found in the Realism playlist, along with the following night versions of specific maps.

There are two Ground War specific maps, and both are much, much larger than any of the maps you'll find in other playlists. This is because each Ground War match can have up to 64 players, for some 32 vs 32 action. Imagine that on Azhir Cave...

Finally, Gunfight is the 2v2 mode which features a series of one-life rounds, with the score limit capped at six. Each of these maps is absolutely tiny, and if you crank your headphones up, you'll be able to hear enemy footsteps no matter where you are on each map.