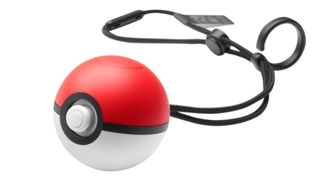 This is the lowest price possibly ever, letting you buy the Poké Ball Plus for $19.99, which is a $30 saving. It usually costs fifty bucks so that's a hell of a good deal for a controller that's also a 'working' Poke Ball, and comes with Mythical Pokémon Mew you can claim in Pokemon Let's GO.

The Poke Ball Plus is one of those 'it's cool but also $50' kind of problems where no matter how much you want it, the price to point ratio never quite balences out. Now at least, at $20 that ratio is a lot more agreeable.

The Poké Ball Plus works as a Joy-Con controller when you're playing Pokemon: Let's Go. the game's minimalist controls means you can control the whole game using this little ball for that authentic poke ball experience. It also contains the Mythical pokemon Mew which you can claim and use in-game.

As well as that, the Poke Ball plus lights up and makes noises according to whatever Pokemon you put inside. You can also use it with Pokemon Go, where its acts like a Pokemon Go Plus and lets you find and catch pokemon while you're out and about.

The best Black Friday game deals across the web (Us)