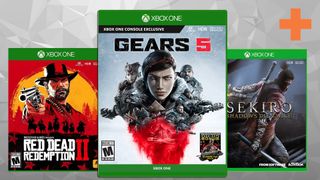 We'll be here throughout Cyber Week to keep this guide to every Cyber Week Xbox One game deal we spot… and possibly even beyond that. Now if you have Xbox One, you can expect all these games to work on it, but if you're looking for a new console then head here to see some pretty tasty Xbox One X Week Monday deals that are out there right now. If that doesn't interest you, we're also tracking the very best Cyber Monday game deals, so you're certain to get a bargain at some point today.

Every Cyber Week Xbox One game deal (US)

You can find more savings year-round on games like these in our guide to cheap Xbox game deals (check out its UK counterpart here). It will hook you up on savings for modern must-haves like Gears 5 as well as a run down of Xbox One accessories, including Xbox One headsets and the best way to save with Xbox Live deals.

Keep the savings rolling with our guide to the best Xbox One X deals.