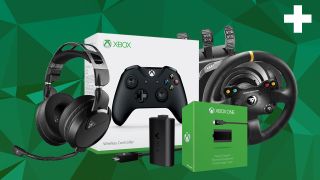 Grabbing an Xbox is a costly enough business as it is, so spending even more on Xbox One accessories isn't what you'd call ideal (no matter how much you need them). That's why our team have rounded up offers on the very best peripherals to save you cash along the way. You'll find all of these below, not to mention a few special discounts in honor of the upcoming Christmas bargains. More are sure to pop up during January too, so keep an eye on this page throughout the sale season to get maximum value for money.

Cheap Xbox game deals
Save your hard-earned cash and get a reduction on the latest Xbox One games with our guide.

Because there's no shortage of Xbox One accessories out there, we've tried to narrow it down to the most essential, genuinely helpful bits of kit that no Xbox owner should be without. As such, this list should help you pick up an external hard drive to boost your console's memory, choose a gaming headset for greater immersion, get an Xbox One controller cheap, and more. We've rustled up a few discounts on Xbox Live deals, too, not to mention the brand-new (and excellent) Xbox Elite Wireless Controller Series 2. Why pay more when you don't have to?

Don't skim over less flashy peripherals like Play and Charge Kits, though. These rechargeable battery packs are worth their weight in gold, and they're definitely less expensive than paying for all the AA batteries you'd need otherwise. We'd recommend making them a priority if you haven't already.

Anyway, down to business - these are the best Xbox One accessories money can buy.

The most essential Xbox One accessory

You won't get far without Xbox Live, so it definitely earns the top spot on this list. Want to venture into online multiplayer by yourself or with friends? You can forget it without this subscription service. We'd recommend picking up the 12-month membership as a result - that's the best value for money in the long term.

There are other benefits to take advantage of outside multiplayer, too; members of Xbox Live get access to regular discounts. They also receive free games each month via the 'Games with Gold' initiative. That in itself makes the price tag worth paying.

The most important weapon in your arsenal

A huge step up from the solid but flawed 360 controller, the Xbox One Wireless gamepad feels like its pulled all the best elements from its predecessor and from The Duke, and fixed a number of the issues (particularly that awful d-pad). No matter whether you need it for co-op or as a replacement to your old handset, getting a spare Xbox One controller is always a good idea.

While the Elite is undeniably a better gamepad overall, it also retails for $150, so the default Xbox One Wireless controller takes our top spot. That said, default doesn't need to me generic and bland - you can get the Xbox One pad in a staggering variety of colors or with a number of skins, branded or otherwise. There are even a bunch of aftermarket modding options, from replacement sticks and buttons to stickers you can use to re-skin it without actually tampering with the chassis.

3. Xbox One Play and Charge Kit

Skip the batteries and stay in the game longer

Of all the accessories you can get for Xbox One, a Play and Charge Kit is probably the most essential. This gives your wireless controller a rechargeable battery pack, and that’s so much more cost-effective than shelling out on AAs.

Aside from swapping out discs, fumbling around for batteries might be the most aggravating part of playing modern console games; the opportunity to never have to do it again, and never have to find your battery charger and plug it in and find another pair to pop into your gamepad while the current set is charging is almost too good to pass up. Pop in the Play and Charge Kit and you'll never have to so much as open the battery compartment again; any time the pack needs charging, just plug in a micro-USB and keep shooting zombies in the head.

Dedicated gaming headsets can completely transform your experience; not only are they more immersive, they also give a tactical advantage through the magic of surround sound. This headset has been at the top of our best headsets list for quite some time, and the reason is simple; it’s truly excellent. The Kraken Pro V2 is the best Xbox One specific headset, a comfortable, quality pair of cans crafted from sturdy Bauxite to endure even your most rage-filled tantrums in the wake of a crushing last second Apex Legends loss.

A noticeable upgrade from the original Kraken, the latest version is louder and delivers clearer sound than ever before, and with it currently selling for around the $50 mark, it's also more affordable. While it might not compete with high-end studio headphones that cost hundreds (or thousands) more, it's still a very robust (and extremely comfortable) headset that's a pleasure to game with.

The best external hard drive for Xbox One

While there may be a good amount of memory on an Xbox One, it’ll run out sooner than you think. This is why an external hard drive is a must. Our pick here - WD’s 4TB My Passport Portable - will sort all of your storage problems.

Games hunger for storage is growing at a frightening pace, pushing up to 100GB or beyond for the latest triple-A titles. And that voraciousness only grows when you factor in digital add-ons and DLC, and the huge number of patches and updates that modern games all require. Finding space to fit more than a handful of games on the included drive in your Xbox One is becoming more and more of a chore, so grab a huge 4TB drive and put your storage anxieties to bed.

The best premium controller for Xbox One (or any console)

If you want precision and exceptionally high build quality, you want the Xbox One Elite Wireless Controller Series 2. With programmable buttons, back paddles, and thumbsticks that can be swapped for performance-targeted alternatives, this is one hell of a tricked-out handset. It's also an improvement on the original Elite in almost every way.

This superb device builds on all the excellent qualities of the standard Xbox One Wireless Controller (the excellent d-pad, responsive shoulder buttons, etc.) while adding a huge amount of customization options and additional features along the way. The clicky rear paddles are fantastic, a great way to rebind controls that normally live on the d-pad to a spot you can reach without having to lift off the analog sticks, and being able to swap the function of literally every button means you can tailor the Elite to suit your personal play style. It looks, feels, and plays like a truly premium controller, and even tops our roundup of the best controllers for PC gaming.

The best racing wheel for Xbox One

Just as headsets can transform the game into something much more absorbing, steering wheels are able to completely change how a racer handles. With force feedback and tactile resistance from tearing around corners, this is one accessory you can’t afford to miss if you’re a fan of driving sims. We'd recommend the Thrustmaster TX; it offers amazing force feedback, a quality feel, and more reasonable pricing than many other wheels.

Screaming around corners in Forza Horizon 4 has never felt so good with the TX in hand; it transforms a great video game into an immersive experience, and it's also a huge hit at parties. It's nearly impossible for the average party guest to see a racing wheel beckoning to them from a coffee table and not want to play with it; throw in the pedal base and it's an irresistible lure.

The way to play on PC

Fancy playing on your PC with an Xbox One controller? If you’ve got an older model, you’ll need the Xbox One Wireless Adaptor for Windows 10. This allows it to sync with your computer. However, those with a newer Xbox One handset should be able to connect via Bluetooth or a standard micro USB cable.

Unsure whether you have a new or old controller? The handset on the left of this picture is an original model, while the one on the right is newer (and therefore able to use Bluetooth on your PC out of the box).