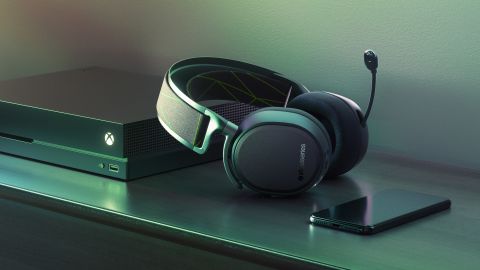 Supplanting the best Xbox One headset I've ever used, the SteelSeries Arctis 9X is a cross-platform, dual-wireless wielding monster of a gaming headset. However a dusting of near-inconsequential shortcomings hold it back from true perfection.

For the platform agnostic, finding the best Xbox One headset that doubles as one of the best PC headsets for gaming is a seemingly impossible undertaking, especially in a broad field of the best Xbox One accessories. Add the best Nintendo Switch headset and the best PS4 headset to the mix and you'll be hard pressed to track down a gaming headset compatible and that excels with every system you own.

In a market dominated by platform exclusivity, the SteelSeries Arctis 9X stands out among the rest. Designed for the Xbox One, I wouldn't blame you for immediately writing it off. Based on the marketing rhetoric alone, you might assume it's tailored to a single device while everything else takes a backseat to Microsoft's eighth-gen console. In reality, the Arctis 9X bears striking similarities to the Arctis 3 Bluetooth before it, albeit with a handful of noteworthy improvements to justify its steep $199.99 price tag.

To be fair, the main selling point of the SteelSeries Arctis 9X is its integration of the proprietary Xbox Wireless protocol. Having worked with the Xbox creator directly to devise its own Xbox Wireless chip built on Microsoft's radio, SteelSeries has no doubt constructed a headset that works well with the Xbox One. But it's also a blessing in disguise for PC gamers.

Since you probably bought an Xbox Wireless adapter for your computer already if you enjoy playing games wirelessly using the superb Xbox One controller, the Arctis 9X might as well be PC-compatible out of the box. What's more, if you prefer to play games from the comfort of one of the best gaming laptops, it supports Bluetooth as well. And, if you're on PS4, simply plug the headset into your controller for a less-than-ideal but still-practical solution.

Granted, as much as I adore its multi-platform approach to functionality, everything about the SteelSeries Arctis 9X's design screams Xbox One. While not a complete eyesore, the green, polygonal design emblazoned on its otherwise all-black headband would be far more compelling to sport in public if it didn't stand out as a gamer's headset.

When I'm at home, kicking back on the couch playing Borderlands 2 in a t-shirt and sweats, I don't mind the edgy aesthetic. However, when I'm on the train leisurely mouthing along to Pinegrove's Skylight for the umpteenth time, I'd rather don inconspicuous headwear. I mean, I guess I could just remove the band, but in doing so I'm taking away my own ability to adjust the fit. It's a lose-lose. Why can't SteelSeries make a headset that tightens without a strap, a la my excellent Sony WH1000-XM3's? But I digress.

What I do like about the Arctis 9X's design is the earcups: man, are they comfy. Drawing influence from sweat-resistant, breathable nylon sportswear, the so-called "AirWeave" ear cushions are made to facilitate airflow, preventing clammier ears from getting hot and sweaty during an especially intense match of Apex Legends.

I've personally never been plagued with ear sweat myself, so I can't say for certain how the fabric ear cushions stack up to SteelSeries' lofty claims. Nevertheless, in terms of snug, the Arctis 9X more than meets expectations.

Although it's largely identical to the $149.99 SteelSeries Arctis 7 intended for PC, apart from the green lines etched on the outside of the headband, the SteelSeries Arctis 9X tucks a few neat surprises behind its homey earcups.

Along the right can is where all the action takes place. A volume wheel at the top is joined by a mic mute button and, below it, a dedicated Bluetooth pairing button, a power button, a micro-USB charging port, and a 3.5mm jack. The mic itself is unspectacular, but it gets the job done. My only complaint is that it's retractable not removable. If SteelSeries wants to make a headset for all of my devices, I don't want it to look like a gaming headset when I'm out and about. On the rear side of the left earcup is a hardwired ChatMix dial for balancing chat and game audio in real-time. You know, without the hassle of downloading and installing the SteelSeries Engine software.

Now to the juicy part. Because it has Bluetooth, Xbox Wireless, and wired functionality, on paper, the Arctis 9X is a lot to manage. Switching between devices is tedious as it is, on a headset that uses Bluetooth alone. To help mitigate foreseeable pain points, SteelSeries invested heavily in its unparalleled versatility. Not only does it support the Bluetooth and Xbox Wireless connectivity standards, but you can use both at the same time.

The other day, while jamming out to "So Very Hard to Go" by Tower of Power in my off-brand Toyota Prius in Watch Dogs 2, I suddenly received a call on my real-life phone from my mom. Before the SteelSeries Arctis 9X came into my life, I wouldn't have been able to answer that phone call without first powering off and then re-pairing my headset to my phone. But, seeing as I can pair the Arctis 9X to my phone and my Xbox or PC at the same time, picking up the phone was as easy as, well, picking up the phone. No strings (or wires) attached.

Its seamless integration of Bluetooth and Xbox Wireless is a big deal, and in my own testing, it worked exactly as advertised. Not once did I encounter connectivity hiccups or interference. This opens up a vast array of possibilities for people who like to play games but whose true talent lies in multitasking. Listening to music or podcasts on your phone and taking out demons in Devil May Cry 5 at the same time has never been easier. Better yet, the Arctis 9X boasts Windows Sonic compatibility for immersive virtualized surround sound on Xbox One and PC.

Likewise, as I mentioned before, the Arctis 9X works with SteelSeries Engine 3, a nifty application for Windows and macOS used to configure everything from the company's Rival series mice to its Apex family of mechanical gaming keyboards. As for the Arctis 9X, it comes in handy for setting EQs, of which four presets exist out of the box: Flat, Bass Boost, Smiley, and Performance. You can make your own, too, for a bespoke phonic experience.

Moreover, in SteelSeries Engine 3, you can tweak overall mic and sidetone volume or enable and disable automatic Bluetooth startup when the headset is powered on. A 'Configurations' tab off to the left lets you create personalized profiles that automatically launch alongside certain games of your choosing. For instance, if I wanted to decrease the bass and sub-bass frequencies every time I boot up a competitive multiplayer games like Overwatch, I can do that in SteelSeries Engine 3. Conversely, if I wanted to crank the bass all the way up in GTA V for a visceral performance of Kendrick Lamar's "A.D.H.D.", I can do that as well.

Though in theory, it should sound worse than competing Xbox One-focused headsets like the Razer Thresher Ultimate, whose 50mm speakers exhibit a frequency response of 12 to 28,000Hz, it's fine-tuned by SteelSeries' engineers to sound better. And in my opinion, it does. Whether it's because of the airy design or the thin layer of nylon material sitting between your ear and the speakers I don't know (my guess is a combination of both).

What I do know is this: in a world full of gaming headsets inhibited by mediocre sound, the SteelSeries 9X is the best Xbox One headset I've ever used bar none. Even its battery life, which according to the company lasts 20 hours on a single charge, just about lives up to the hype. I went days without charging it, connected via Bluetooth to my Shield TV, playing several hours of Watch Dogs 2 per night.

Overall - Should you buy it?

For years now, I've been using Razer headsets with my Xbox One, unaware I was missing out on an altogether superior product from SteelSeries. That said, considering the Arctis 9X didn't exist until now, maybe I wasn't really missing anything until just now. Prior to the advent of the 9X, Xbox Wireless and Bluetooth lived worlds apart. Their functionality was mutually exclusive. Now it's converging in one of the most genuinely innovative gaming headsets I've seen to date. It may cost $200, but the SteelSeries Arctis 9X is well worth the barrier to entry.

From its stately design to its unbridled comfort and performance, the SteelSeries Arctis 9X is more than a headset for Xbox. It's pioneering a new breed of multiplatform peripheral. Any criticisms I have are minor, almost to the point of negligibility. If you're not already, you should be paying attention to SteelSeries. Otherwise, you're missing out on premium-quality sound as fit for your Xbox One as it is your smartphone or PC.

Supplanting the best Xbox One headset I've ever used, the SteelSeries Arctis 9X is a cross-platform, dual-wireless wielding monster of a gaming headset. However a dusting of near-inconsequential shortcomings hold it back from true perfection.

Gabe has been writing about the intersection of games and technology since the tender age of 16. Previously seen on TechRadar, Digital Trends and PC Magazine, he currently serves as a Senior Writer on the central hardware team spanning GamesRadar and PC Gamer. In his leisure time, you can find him amassing Razer products, playing games and watching superhero movies ranging from bad to mediocre in his cramped Brooklyn apartment.
See comments