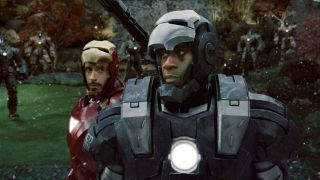 Phase 4 of the MCU will pick up expediently in May of 2020 with the Scarlett Johansson-led Black Widow, and continue with The Eternals, Shang-Chi and the Legend of the Ten Rings, Doctor Strange in the Multiverse of Madness, an untitled Far From Home sequel, and Thor: Love and Thunder.

Per THR, the dates didn't accompany any further information about the MCU projects, but we can assume they'll be part of the MCU's fifth phase. Black Panther 2, currently slates for a 2022 release, will kick off the new chapter, with the new dates spanning between late 2022 and 2023.

It speaks to the enormity of the MCU and Disney's long-term vision that we haven't even entered Phase 4 and we're already getting dates for Phase 5 some four years down the road. While we still know very little about Phase 5, here's everything we know about the MCU's Phase 4, including release dates and cast news.

Marvel movies are best watched on an unnecessarily big 4K TV, and you can get one with hundreds off the sticker price when Black Friday TV deals start popping up.