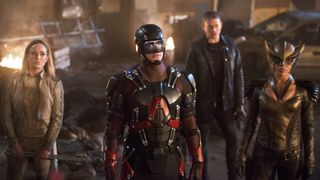 An unlikely alliance between the heroes and villains of the DC universe takes centre stage in DC’s Legends of Tomorrow season 1, available on Blu-ray and DVD now!

From the creators of The Flash and Arrow comes this super hero team-up that combines characters from both shows - in addition to new heroes from the DC Comics pantheon.

Having seen the future, time-travelling rogue Rip Hunter assembles a disparate group of both heroes and villains to confront the unstoppable threat of the immortal Vandal Savage - a threat which not only puts the planet at stake, but all of time itself.

Featuring a star-studded cast including Brandon Routh (Arrow, Superman Returns) as The Atom, Wentworth Miller (Prison Break) as Captain Cold and Caity Lotz (Arrow, The Machine) as Black Canary, this singular superhero spinoff series pits the ragtag team against one of the most powerful villains in the DC Comics universe.

To be in with a chance of winning one of five Blu-ray copies, simply answer the question below.