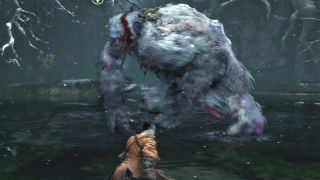 How to kill the Sekiro Guardian Ape boss

The first phase has him doing all sorts of unpleasant things including farting and literally throwing poo at you. Both of these attacks are poisonous and should be avoided. Otherwise, this fight is largely about being very much in the Ape’s face for the first part of the fight. Doing so means he is less likely to try and stink bomb you. You can also cheese his first phase by simply running around and waiting for him to flail about on the ground before stabbing him twice in the head.

Once you have taken a health bar the real fight begins. In this phase, the biggest issue is the terror damage that comes from the screaming attack. If you see the head taking a deep breath in you are going to want to run far away. Other than this this stage is a little more conventional than the first.

You can parry most of the sword attacks despite the strange timing but the one to really watch for is when he raises the sword above his head. Deflect this well and the beast will stumble and make for a great chance to attack its stump. If you have an upgraded spear you can use the pull attack to deal a huge chunk of posture and vitality damage.

The second fight occurs in the Poison Pools area and is the same as the second phase from the first fight but twice. Also, once you have taken out the first health bar, the Ape’s mate will arrive. The second ape fights in the same way as the first form of the Guardian Ape. You can take her out using Firecrackers and liberal use of your sword. Just keep an eye on both and you’re golden.