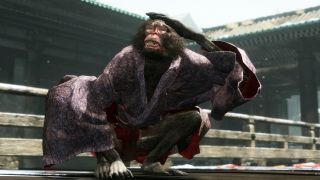 The Sekiro Folding Screen Monkeys boss is the best puzzle boss that FromSoftware has done so far. You just have to kill four monkeys in order to make it out of this strange dimension in Sekiro, each of which is terrible at fighting so it is simply a matter of catching them. As you take them down more illusory monkeys will appear to attack you, it is worth fending these off in order to avoid being overwhelmed. Read on for details on how to catch and defeat the Sekiro Folding Screen Monkeys boss.

How to kill the Sekiro Folding Screen Monkeys boss

The start of the fight has one of the monkeys behind you and invisible, turn around and attack the area and your blade will find this particularly stealthy monkey. This one is the weakest of the lot physically so a single strike will usually do it.

The green monkey is next on our hit list. Jump to the tree in the centre of the level and then up to the bell ahead of you. If you ring this once the green monkey is overhead you will stun the jumpy thing, grapple up and then kill it off.

The purple monkey has great eyesight but needs light to see you. It can be found in the far left building. Go up to the roof and you should spot the monkey below you. Jump down and it will run off, have a look around for a set of doors you can open and then do so. Then find the purple monkey and chase it back to this room. Once again go to the roof but this time you should be able to deathblow the monkey from above.

The final orange monkey is a loudmouth. He tends to roam a bit more than the others but is much easier to sneak up on. Just get behind him and deathblow him for the victory. If at any point you are struggling with this you can use Gachiin’s Sugar for a stealth boost that makes the whole thing far easier.