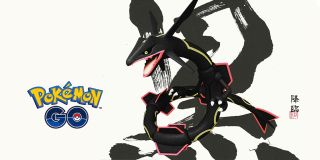 For the first time in a long time, Rayquaza is coming to Pokemon Go. As Niantic announced today, the Legendary Pokemon will appear in five-star raids from Wednesday, July 31 at 1pm PT / 4pm ET / 9pm BST through Monday, September 2 at the same time. In other words, you've got a whole month to hunt for a coveted Shiny Rayquaza.

As Niantic advised, and as long-term Rayquaza hunters well know, this Legendary is extremely weak to ice attacks, so much so that you can basically bulldoze it with the right team composition. Assemble your best ice Pokemon and get ready to raid. There's no telling when Rayquaza will be available again - judging from the pattern so far, probably around 10,000 years from now - so make the most of these limited-time raids while you can.

Rayquaza aside, Pokemon Go Trainers got another bit of good news today: the storage cap on Pokemon has been raised from 2,000 to 2,500. That's another 500 Rayquaza you can hold, and 500 more slots for all the Ralts you'll catch during the August Pokemon Go Community Day. Or, you know, maybe just treat it as a nice quality of life change and a bit of storage overhead which will make daily play more manageable and individual grinds less stressful.