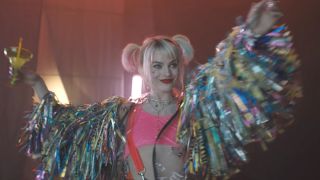 It's no secret to say that DC's recent output of films has been... middling, compared to the growing empire of the MCU, at least. But the upcoming slate of DC Extended Universe movies could be about to change that, with dozens of in-the-works projects currently in various states of production over at Warner Bros. Heck, they could even make up for the slow motion train wreck that was Justice League.

But Wonder Woman and Aquaman are only the beginning of a DCEU worth watching and even future Harley and Joker movies sound far more appealing than anything we saw in Suicide Squad. Oh, and if you’re wondering where the Joaquin Phoenix Joker film is, it’s very separate from the DCEU where our official Joker, regardless of your thoughts on him, is Jared Leto. Here, in release order until all those pesky TBCs, are all the upcoming DC Extended Universe movies.

Birds of Prey (and the Fantabulous Emancipation of One Harley Quinn)

No, that title isn’t a joke. As revealed by Margot Robbie on Instagram, Birds of Prey (and the… oh you get the idea) follows the titular Quin (now clad in even more colourful clothing) after she has broken up with the Joker. I wonder how that conversation went... Regardless, she then teams up with Huntress, played by 10 Cloverfield Lane’s Mary Elizabeth Winstead, and Black Canary (both of whom can be spotted in the brief Birds of Prey teaser).

If that sounds like a trio to be reckoned with, it is and Ewan McGregor as Black Mask is going to have his work cut out for him. The plot so far reveals that the Birds of Prey and Gotham City Police Detective Renee Montoya come together to protect a young Cassandra Cain, or y’know, Batgirl. Directed by Cathy Yan, this is one to watch out for and definitely one of the most exciting additions to the list of upcoming DC Extended Universe movies.

You might have seen those shots of the return of Steve Trevor already in Wonder Woman 2 but that doesn’t mean we’re getting to see Gal Gadot return as our favourite Amazon any time soon. What was once a November 2019 release date has shifted all the way to June 2020, meaning that Patty Jenkins has plenty of time to make this ‘80s-set sequel just right. Yep, I said the ‘80s which of course raises all kinds of questions about Chris Pine’s return.

Patty Jenkins has already assured fans at San Diego Comic Con 2018 that this is "a very important part of [the] movie" so we’re going to have to trust her on this. Excitingly, Kristen Wiig is on board as villain Cheetah, as well as Game of Thrones’ Pedro Pascal who is rumoured to play a god - maybe one who can resurrect handsome army men? Plot details are mostly speculation at this point and it’ll be interesting as to whether Cheetah will be imbued with cat powers or just, err, wear fur but expect teasers and perhaps answers to start next summer.

You’ve hopefully already forgotten the dreadful Green Lantern movie starring Ryan Reynolds. It’s telling that Reynolds actually doesn’t have to forget it, given that he never actually watched the movie. Instead, the Green Lantern Corps is slated for a July 2020 release date with a script written by none other than DC’s Geoff Johns, the man responsible for the Lantern’s excellent recent DC Comics run.

Talking to Comicbook.com in 2018, he said to expect more of everything good about Hal Jordan’s battle with Sinestro in the graphic novels but he needs time. "I want to make sure I write the best script I can possibly write, so I need to go away in a cave and write that script and finish it and then come out and go 'okay' and work with the guys and really make sure we've got the best story to tell and the best way into this character,” he said. “I think we have a lot of things in it that… people know my run from Green Lantern and so they shouldn't be too surprised by seeing what we bring into it."

With a development more tragic than the Dark Knight’s origins story in an alleyway next to a theatre, this is another new DC Extended Universe movie which feels very much up in the air. As well as reprising his role as the Dark Knight, Affleck was originally set to write and direct the movie but eventually stepped down (departing the role of Batman entirely) to make way for a new recruit both behind and in front of the camera. The new Bruce Wayne has yet to be cast, but Warner Bros. (via Slashfilm) apparently has a specific, slightly fresh faced age range in mind, and doesn't want to cast a complete unknown.

Cloverfield's Matt Reeves has been confirmed to direct, and, speaking to Slashfilm back in August 2018, stated The Batman will be a “noir driven definitive Batman story”, explaining that “there are ways in which all of this connects to the DC universe as well." And while the director confirmed that the movie won't be based on Frank Miller’s iconic Year One comic, he did tell The Hollywood Reporter that there would a "rogues gallery" of famous DC villains appearing. Could the Joker be one of them? We'll have to wait and see.

Despite the less than favourable reviews from critics - that seems a polite way to put it - Warner Bros. is still gunning, so to speak, for another Suicide Squad movie. In even stranger developments, Guardians of the Galaxy director James Gunn is now attached as writer and director, despite also being brought back in to helm Guardians of the Galaxy 3 for Marvel after Disney originally fired him in 2018.

Former Suicide Squad co-lead Will Smith has also exited the project, with Variety reporting that he has left the role of Deadshot as a result of scheduling conflicts, while The Hollywood Reporter claims that Idris Elba is in talks to replace him as the charismatic DC villain. As for Gunn's take on the property, the auteur has teased the return of Margot Robbie's Harley Quinn, and reports say he's aiming for more of a reboot than a sequel, with the yet to be announced title currently known as The Suicide Squad, rather than Suicide Squad 2. At this point, we'll take anything that distances itself from David Ayer's 2016 flop.

At one point, Victor Stone, AKA Cyborg, had a set release of October 2019 for his standalone movie but there are some serious questions as to whether this is still going ahead. After the less than stratospheric success of the first Justice League movie, Warner Bros. has been particularly quiet on Ray Fisher starring in his own movie. Speaking to Screenrant in mid 2018, actor Joe Morton who plays Silas Stone, the father of Victor, in Justice League, said that there were still plans for a standalone movie but he hasn’t seen the script as yet. He also admitted that due to the problems in the production of Zack Snyder’s Justice League, with Joss Whedon coming in to do reshoots, he couldn’t confirm what Cyborg’s story would be. What was cut out of the movie may or may not become the main story of the standalone film. We’ll need to wait and see on this but it would be a shame to see this disappear from the DC Extended Universe movies roster.

The Flash movie production hasn't had much luck or any of the powers of its titular hero. Having lost two directors, it eventually pinned down duo and Spider-Man: Homecoming writers John Francis Daley and Jonathan Goldstein. All this uncertainty meant that it lost its confirmed release date and Ezra Miller’s Fantastic Beasts commitments have been rumoured to move it all the way to 2021. There’s been a title change too from Flashpoint, to just The Flash, but the movie is still expected to follow the timehopping alternate reality-filled Flashpoint comics story. Ezra Miller will definitely be back as The Flash after his previous scene stealing performances as the speedy superhero but everything else at the moment is up for debate.

Because one Justice League just isn't enough, Warner Bros. also has planned a Justice League Dark movie, a much more villainous version of Supes and co. Guillermo del Toro originally worked on the movie, which he reportedly said would see John Constantine recruit members of the Justice League Dark - Swamp Thing, Deadman, Zatanna and Etrigan the Demon - but by 2015 he was no longer attached to the project. A year later, Warner Bros. hired Edge of Tomorrow's Doug Liman to direct the film, with Scott Rudin producing, and Michael Gilio writing the script, but then Liman dropped out due to scheduling conflicts. Given that it’s been musical directors chairs, hoping for this anytime soon might be wishful thinking but if you need your Dark Justice League fix, you could always watch the excellent animated movie released last year.

If all of this is starting to sound like everything is in development hell, it absolutely is. Deathstroke, or Slade Wilson, has been circling the DCEU rumours for years, eventually cropping up in the Justice League post credits scene played by Joe Manganiello. This one eyed antihero was originally meant to star in Ben Affleck’s The Batman and has been rumoured to get his own movie since late 2017. Raid and Apostle director Gareth Evans was signed on to direct this standalone title but apparently he’s pretty busy until 2020 which means we might have a really long time to wait.

This new DC Extended Universe movie was originally intended to be the second, and concluding part, to Justice League - Part 1, directed by Zack Snyder and slated for June 14, 2019. As you can see, it's been pushed back indefinitely and turned into an untitled and unspecific Justice League sequel instead. With that in mind we literally know nothing about it and there's even some speculation that it might not happen at all now given the bad reaction to the first Justice League film. Don't write it off just yet though. While Justice League might not have been a big hit with critics and some fans, it still made a killing at the box office and the critical success of Aquaman might just have reignited the desire for more where that came from.