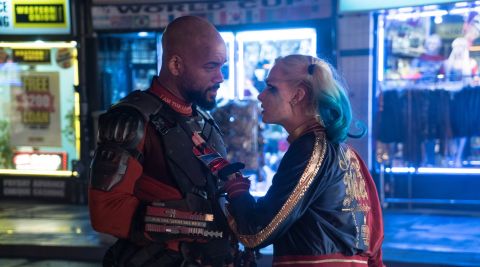 Starts off flavourful, turns rather bland. This Injustice League jaunt proves that DC is still a long way behind Marvel for on-screen action.

Cast and crew gave each other tattoos. Writer/director David Ayer (Training Day, Fury), an ex-Navy man, used military tactics to reduce his cast to a state of physical and mental exhaustion. A psychiatrist was available on set. Cara Delevingne, playing a witch, was told to use her spare nights dancing naked in the pale moonlight (she did). Jai Courtney, as Aussie bank robber Captain Boomerang, went so deep into character he stubbed cigarettes out on his arm. And, like you haven’t already heard, Jared Leto, playing a Joker that somehow needs to prance out of Heath Ledger’s shadow, sent co-star Margot Robbie a dead rat.

Never mind Deadpool: Suicide Squad is the bad boy of superhero movies, a film that has proudly purported itself to be “unhinged”, “nightmarish” and “fucking insane” in promotional interviews. It’s Batman Vs Superman: Dawn of Justice’s nasty, narky little brother. It’s A Clockwork Orange with special powers. It’s… not half as badass as you want it to be, but rather a major studio’s idea of being dangerously screwy, with even its soundtrack – ‘House of the Rising Sun’, ‘Spirit in the Sky’, ‘Bohemian Rhapsody’ – designed for mainstream airplay.

Things start off well, with government hard-ass Amanda Waller (Viola Davis) assembling Task Force X, a team of misanthropic misfits who can help protect national security now that Superman’s in the ground. “In a world of flying men and monsters,” she barks at her colleagues over dinner, “this is the only way…”

For those uninitiated with DC’s cult comics (and needing to be brought rapidly up to speed with a bunch of characters who have not previously seen live action), Waller flicks through their files, one by one: Deadshot (Will Smith, reminding us of his star power), the world’s most wanted assassin; Harley Quinn (Robbie), an ex-psychiatrist at Arkham Asylum who first fell for patient the Joker (Jared Leto) and then into a vat of toxic liquid; Cap. Boomerang, whose drone devices return to him; fire-spraying meta-human Diablo (Jay Hernandez); Killer Croc (Adewale Akinnuoye-Agbaje), a man-beast being contained in a sewer-cell and who wants to be this movie’s Thing or Rocket Raccoon but is not as memorable; and aforementioned witch Enchantress (Delevingne), an ancient force who takes over Dr. June Moone (Delevingne again) when called upon, and whose physical-ethereal form, all billowing smoke and oozing embers, resembles one of Guillermo del Toro’s ghosts.

Suffice to say they must first battle their way past an army of frog-spawn-suited minions that came to Ayer in a dream (and, like most nightmare-monsters, lose all power when presented to others) while Midway City burns with detritus all about. Yes, this is essentially Escape from New York with a squad of Snake Plisskens and a side portion of sadistic Joker. Leto’s grinning loon haunts the periphery of the action, but sad to say, proves as empty as his laugh.

Early scenes are shot in tattoo-ink purples, gangrenous greens and electric blues, a palette that evinces Joel Schumacher’s Batman movies dosed with disease, though much of the action takes place in a world leeched of colour and forever soaked in rain. Frames shudder, edits jolt, and several images scorch the backs of eyeballs, not least Harley Quinn’s introduction – hanging upside down in a cage in the middle of a vast empty room, like some strip-joint Hannibal Lecter.

Once busted out, she goes on to be Suicide Squad’s best and brightest, Robbie playing it coy and male-fantasy sexy, cute and crazy. Sure, it can be argued that Suicide Squad puts gender issues back by 30 years – its guys are covered, its ladies all but unclad, with Harley squeezed into itsy-bitsy shorts and a tight T emblazoned with ‘Daddy’s lil monster’ – but Robbie at least owns her sexuality enough to make fools out of the gawping guys. Hell, she and her offensive costume are the only real anarchy on display.

But Harley Quinn aside, the bantz is blunt, the arcs predictable (all these “psychotic social freaks” just wanna have happy home lives, dontcha know?) and the Big Bad straight out of Ghostbusters – fine in a ‘normal’ summer movie, but lacking any of the real threat posed by the knife crime and terrorism in Christopher Nolan’s The Dark Knight.

It’s to be expected, certainly, when the budget is in the (reportedly) $250m range, and serious kudos should be given for introducing new characters to the screen in a summer of sequels and reboots. But consider this exchange: “Outside, you’re amazing. Inside, you’re ugly,” says Boomerang to Harley, to which she replies, “We all are. Except him [points to Killer Croc]. He’s ugly on the outside too.” Now that’s the film we want to see. The film we were promised.

Starts off flavourful, turns rather bland. This Injustice League jaunt proves that DC is still a long way behind Marvel for on-screen action.