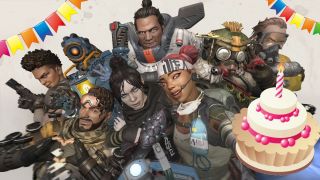 Apex Legends is celebrating its first birthday, and what a year it has been. The game surprise-launched on February 4, 2019, and it was an immediate hit, with 50 million players leaving the dropship within the first month.

The success of Apex Legends is even more wild when you think about the circumstances in which it arrived. We were expecting Respawn to give us Titanfall 3 – instead it launched a free-to-play battle royale on the same day of its reveal. Oh, and the game was pretty damn good too, borrowing many of the best elements of Titanfall, Fortnite, and PUBG and combining them with an array of brilliant new features – the ping system among the most notable, which was immediately pilfered by Fortnite in the weeks that followed. The diverse cast of characters with fleshed-out backstories gave Apex a distinct hero shooter vibe in a universe defined by "characters" like Fortnite's man in a banana suit. On top of all of that, the Overwatch-y lore let us connect with the Legends in a manner that made the game all the more engaging.

But Apex Legends has been far from flawless, and its blemishes were noticeable: hit box issues, ludicrously expensive microtransactions, and some seriously beige character skins. The first season was a bit of a hot mess express, but Respawn has consistently taken meticulous notes, steadily improved upon Apex's formula by introducing new characters and weapons, making necessary gameplay adjustments, and dropping us into an entirely new map. The future is as bright as the game's muzzle flash (patch incoming, apparently), and with season 4 and Revenant dropping today, it looks like Apex Legends' second year will be even better than the first.

Let's look at how much the innovative battle royale has evolved in just one year, and ponder what its second year will look like.

Apex Legends season 1: Welcome! Come and get ya… boring skins?

Apex Legends dropped February 4, 2019, but the first season, Wild Frontier, didn't start until March 19. The delay gave players some time to figure out the game's mechanics (sort of like Titanfall but without wall-riding and double-jumping) and determine which Legends were the right fit for them (Gibraltar's hit box was far too large, while Lifeline's healing drone made her a guaranteed member of the trio).

When season 1 launched in mid-March, so did adrenaline junkie Octane and the game's first Battle Pass, which cost 950 Apex coins (or $9.50). Players could pay extra to unlock the first 25 tiers (of 100), and those who didn't purchase the Battle Pass could still get some free swag, including one Legendary skin for Octane.

But many found the lack of cosmetics disturbing, and lamented that there were no season challenges, which Fortnite was already well-known for. An EA news post from March 2019 said season 1 was "about keeping it focused" and that Respawn would "begin adding more and more innovations each season as we evolve the Battle Pass". Despite this, players were more than a bit disgruntled that the rewards were less-than-stellar, and there was no chance to gain any cooler ones from attempting different challenges.

How many people play Apex Legends?

And then there was the game's convoluted (and pricey) currency system. The Verge reported in February 2019 that players thought in-game items were way too expensive, pointing out that certain weapons and skins could cost close to $20, and the existence of two additional currencies (scrap and Legend Tokens) further complicated matters.

Respawn started incorporating new challenges and better swag towards the end of season 1 with the Legendary Hunt, an in-game event that ran from June 4-18. During it, players could complete special challenges, earn better rewards, and join a queue for the very best of the best. This temporarily upset the loot table, as Reddit user RotomGuy posted back in June of last year reversing changes to loot that included Lifeline's care package not spawning gold items, and fewer Wingmen and Peacekeepers. The currency system remained the same.

Add that to some strange exploits, server issues, large disparities between Legends' hit boxes, and glitches that included an invisible inventory wheel, and it was clear that there was still work to be done. Luckily, Respawn was up to the challenge.

With great skins comes great responsibility, and Respawn quickly found that giving the people what they want doesn't mean charging them $18 for legendary cosmetics.

Season 2: Battle Charge started on July 2, bringing with it the electrifying Wattson (and thus completely changing the meta), the introduction of daily and weekly challenges, the L-Star started arriving in care packages, and there was the promise of more legendary skins. We also got a chance to drop into the arena solo, which meant the blame for an early elimination rested solely on our shoulders.

Respawn had certainly listened to season 1 feedback, but microtransactions were still a major flaw in the system. And somehow it got worse. The Iron Crown event, which ran from August 13 to the 27, brought with it some of the coolest skins the game had seen yet, but at costs that were offensively high. As in '$7 to buy one loot box, with no clear notion of what you were getting, and $154 to unlock every cosmetic' high. Naturally, people raged, but Respawn and EA were quick to respond, releasing a blog post that acknowledged they "need to be better at letting our players know what to expect from the various event structures in Apex Legends."

Respawn listened, but did it fix the system? The answer lies somewhere in the middle, as the studio made it possible to buy specific items and made it crystal clear what type of items you could expect in an Apex Pack – but the cost was still rather high.

However, season 2 saw players settling into a new meta that focused on holding down rooms with Wattson's electric fence, and a more painful ring that moved quicker, encouraging more firefights out in the open. The game was finding its footing, and more and more players were enjoying the ride.

But Apex needed to step out from under the expensive shadow of Iron Crown, and there's no better way to do that than by remixing the entire game.

Enter season 3: Meltdown and World's Edge, a brand-new map that dramatically shifted the meta. World's Edge was clearly designed to encourage long range shoot-outs, with impossibly long sightlines and an increased verticality tailor-made for Pathfinder's grappling hook. We also got to meet Crypto, whose drone allowed him to scan the map's open areas without showing his ass, as the kids say.

However, season 3 also introduced us to the Charge Rifle, an anti-Titan gun from Titanfall that was positively bonkers when placed in Apex. An energy-powered sniper rifle with a double-kick (the initial hit while it charges deals damage, while the second hit is even more powerful), the Charge Rifle quickly became the most sought-after weapon on the new map, and it hurt. Feedback was swift and loud, and Respawn nerfed the weapon twice within a week.

The third season stretched on a lot longer than the others, but that only meant we could enjoy a handful of ingenious events, as Respawn really spread its creative wings. We got tastes of its creative muscle with themed events centered around Octane and Wraith, but as 2019 progressed, those events became even more inspired.

At the start of spooky season we got Fight or Fright, a Halloween event chock full of great skins featuring a brand-new, limited-time game mode: Shadowfall. Shadowfall was Apex Legend's take on Halo 3's infected mode, complete with sped-up, zombie versions of the Legends. Fight or Fright also debuted the highly anticipated Duos mode, which gave us one less person to blame for not becoming Apex Champions without the singular pressure of running solo. Then, we rang in the holidays with Mirage's Holo-Day bash, but Respawn really swung for the fences with the Grand Soiree, the event leading right up into season 4.

In it, we got seven new game types every two days for two weeks, and skins that would make Jay Gatsby green with envy. All of these events, which took place rather close to one another, helped Respawn drag out season 3 without pissing players off too much.

Apex Legends season 4: Fear Revenant, but not the future

Let's be honest, despite the great events and increasingly cool skins, we've been waiting for season 4 and Revenant – Respawn's worst kept secret. Apex Legends' scariest character was leaked as far back as last fall, and even popped up in a level designer's artwork in October. Everyone knew he was coming, and we all assumed he would arrive alongside season 4.

But it seemed Respawn had other plans, as they revealed in a devstream that the next legend would be Forge, the shredded MMA-type fighter with a corporate sponsorship and a line shaved out of his eyebrow (not joking).

And then Respawn murdered him. Literally. As we previously reported, during Forge's  'Stories from the Outlands' video that always accompanies the launch of a new character, Apex's Jimmie 'Forge' McCormick was brutally murdered by – guess who – Revenant. A few days later, a dark and twisted trailer for Revenant dropped that teased another leaked character – Rosie (or Loba).

If the twists and turns of the last few weeks are a sign of what's to come, then Apex Legends' second year is going to blow the first out of the water. Respawn is clearly having a blast with writing stories for this world and developing characters to inhabit it, and it truly feels like the game and its developers have hit a stride that can't be interrupted. Respawn has rounded the corner of the 200m dash, and there's only the straight-away now.

If I had to guess, I'd say we can expect more cosmetics, more nods to the lore embedded in map design, more map changes, new gametypes, and a deeper dive into character's backstories.

I don't know about you, but I'm excited.

Apex Legends season 4: Assimilation drops on February 4, the game's one year anniversary. Catch you on the ground, Legends.