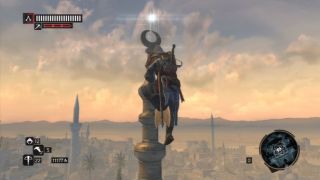 With the inclusion of Assassin's Creed Revelations on Xbox Games with Gold in April 2017, we've revisited this classic guide to help you locate all of its collectibles.

Another year brings us another Assassin's Creed, and another Assassin's Creed means a ton of new collectibles to ferret out and snag. This time around, the developers' ambitions have been scaled back a little; instead of flags, feathers and Glyph or Cluster puzzles, we have 100 Animus Data Fragments to hunt down, and 10 pages of memoirs by deceased Ottoman vizier Ishak Pasha.

Collecting the former is vital to opening up Desmond's memories on Animus Island (although you only need 30 to see them all), as well as netting the Capped Achievement/Trophy. The Pasha pages, meanwhile, will unlock an entirely new challenge level and the coolest suit of armor in the game. In either case, you know you want them all - that's why we're here to help you find them with maps and screenshots pointing you to each one.