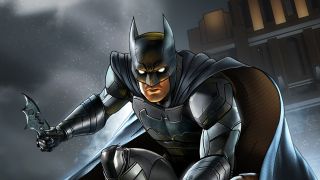 The Xbox Games with Gold March 2020 lineup will bring you four fresh games, and it's another solid lineup across all kinds of genres. This month will be especially rewarding for players who have been keeping up on their Xbox Games with Gold from months past, as both Batman: The Enemy Within and Castlevania: Lords of Shadow 2 follow up on relatively recent selections. Meanwhile, Shantae: Half-Genie Hero is a treat for anyone who can enjoy retro-inspired sidescrolling action, and, so is Sonic: Generations - or at least the "Classic Sonic" half of it is.

Remember: any games you claim during their availability period will remain accessible so long as you have an active Xbox Live Gold membership. And don't forget that any Xbox or Xbox 360 games made available through Games With Gold are also backwards compatible with Xbox One, letting you keep everything on one console. If you need a new membership, here are the best Xbox Live deals today.

Batman: The Enemy Within - The Complete Season (Xbox One) - Available March 1 - 31
Telltale Games' Batman series continues with its second season, The Enemy Within, and if you claimed your free copy of the first season back in December, you should be all ready to catch up with Bruce Wayne. You can still play The Enemy Within as its own standalone experience, though you'll miss out on the ways your decisions in the first season can influence the state of Gotham and its heroes and villains in the second.

Shantae: Half-Genie Hero (Xbox One) - Available March 16 to April 15
The Shantae series gets back to its belly dancing, shapeshifting roots in this refresh of the long-running series that started back on Game Boy Color. While Half-Genie Hero is a tribute to side-scrolling action platformers, its polished, modern art style and subtle use of branching levels make it feel timeless. Plus, you can use the power of dance to turn yourself into a fish or a monkey. How many other games let you do that?

Sonic Generations (Xbox 360) - Available March 16 to 31
Inside each Sonic fan there are two hedgehogs: one who is lanky with green eyes, and one who is pudgy with black eyes. Sonic Generations finally lets fans enjoy both sides of their fandom in one game. Certain levels let you play as Classic Sonic, racing from left to right in the old-school, sidescrolling perspective, while others star Modern Sonic, charging toward the horizon in the 3D gameplay that started with Sonic Adventure. The clever combination of gameplay styles, not to mention the unlikely meeting of the two sides of one blue hedgehog, made it one of the best Sonic games in recent memory.

If you need more room to store all these free games, check out the best Xbox One external hard drive deals.