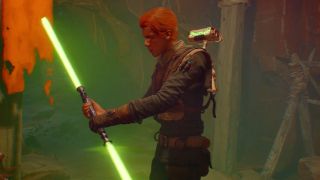 Lightsaber customization in Star Wars Jedi: Fallen Order is surprisingly intricate, and Disney's Star Wars Galaxy's Edge attraction lets you wield a near-exact replica of your in-game saber. It's a small miracle for Star Wars fans that saber customization is so streamlined across the theme park and video game, as adoring parents of real-life custom sabers can bring their mementos into Fallen Order, and likewise, players can bring their painstaking creations to life at Galaxy's Edge.

Making your Fallen Order lightsaber in real life is as easy as taking a trip to Disney World in Florida or Disney Land in California with a list of the in-game parts you need. That's right, the parts you used to build your saber in Fallen Order - the switch, sleeve, endcap, etc. - are available at Galaxy's Edge, filed under the exact same names (Power and Control, Peace and Justice, etc.). Unfortunately though, it's one blade per Jedi, so your in-game double-bladed saber will remain a virtual treasure for the foreseeable future.

Polygon's Ryan Gilliam had the chance to visit Galaxy's Edge and build his own real-life lightsaber. Subsequently, as he played through Fallen Order and discovered new parts to customize his in-game saber, his real-life saber began to lovingly take form in-game. You can check out comparison shots below. Aside from some minor dimensional discrepancies, it's the exact same weapon, right down to the lovely purple blade.

Holding out for a price cut on Star Wars Jedi: Fallen Order? Keep up with our guide to the best Black Friday game deals and you might just get lucky.