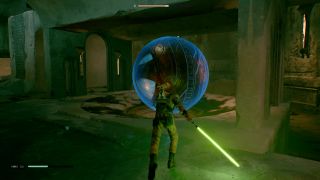 In Star Wars Jedi Fallen Order the Tomb of Eilram on Zeffo hides a series of ball puzzles that require you move and redirect a series of orbs to variosu platforms. It starts simple but it's easy to get confused and if you're struggling then we've everything worked out for you here.

As part of the campaign you'll travel to Zeffo to search out the Tomb of Eilram, unlocking Force Push as a result. With that power in hand you'll then have to push a series of giant balls around, using wind and tracks to place them on various switches. Get it right and you'll change the level and be able to progress. Get it wrong and, well, that's why we're here. Read on to we'll walk you through both the Star Wars Jedi Fallen Order ball puzzles on Zeffo, in The Tomb of Eilram.

Ball puzzle 1 in The Tomb of Eilram, Zeffo

The first chamber you reach in The Tomb of Eilram in Star Wars Jedi Fallen Order will have a single ball resting against the wall. Activate the switch behind it to turn on a blast of wind and send the ball smashing into a far wall and revealing a Force Echo you can collect. Turn the wind off and then go to where the ball ended up and activate another switch for some more wind, which will smash the ball through another wall. Leave the other switch on and then activate the other switch you'll find in the newly smashed wall. This should put the ball in the middle, lined up with another vent you can activate to blow it into the centre of the room and on to the podium. That will raise the floor and reveal a secret chamber below with a Force Echo inside.

Ball puzzle 2 in The Tomb of Eilram, Zeffo

The second Ball puzzle in The Tomb of Eilram on Zeffo will get you out, and back on the story in Star Wars Jedi Fallen Order. To solve it you'll first have to Force Push the ball you previous placed on a podium off, and on to the other podium under the arch. There'll be a Temple Guardian nearby to deal with if you haven't killed it already.

When you get the first ball in place a door will open up behind where the Guardian stood. Go in and to the left to find a second ball you can Force Push back into the main chamber and position on the track to the left of the first ball. The wind will push it around and up to the higher level where you'll be able to Force Push it into a podium to reconfigure more parts of the room.

Get the third ball on to the track so the wind starts blowing it around then climb up to where it flies past after the ramp has launched it into the air. Time your Force Push to send it into the third and final podium.

When the final ball hits the podium the structure it's on will raise up, giving you a new climbable wall you can use to reach the left that brought you to the tomb, and the way out.