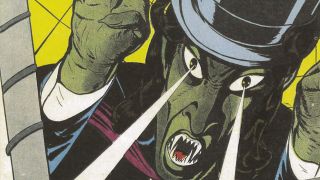 Celebrating the dodgiest D-list reprobates ever to see print in comics, Jon Morris's The League of Regrettable Supervillains gathers together such forgotten fiends as Brickbat (beware his poisonous bricks, do-gooders), the Swarm (a crook composed of bees... but not just any bees... Nazi bees!), and Robbing Hood, whose schtick is that he robs from the poor to give to the rich, naturally. It's a fully illustrated feast of cracked genius.

Riffing on the Cinderella story, Ashley Poston's Geekerella is a love letter to fan culture, telling the tale of nerd girl Elle Wittimer, who's obsessed with Starfield, the classic SF show she watched with her late father. Will she win the cosplay competition at the upcoming Starfield Con - and find true love too?

We have 10 sets of both books to give away. To be in with a chance of winning, simply answer this supervillainous brain-buster...