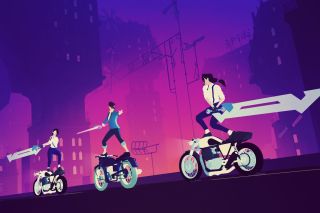 The beautiful and critically acclaimed arcade game Sayonara Wild Hearts just surprise-launched on Steam. The neon motorcycle fever dream from Simogo and Annapurna Interactive is up for three awards at The Game Awards 2019: Best Mobile Game, Art Direction, and Best Score and Music. It initially launched on Nintendo Switch, PS4, and Apple Arcade, and now it's finally available for PC, dropping unannounced on Steam today.

Sayonara Wild Hearts is a low-fi emotional motorcycle/skateboarding race that will tug on your heart strings and challenge your reaction speed from the onset. As GamesRadar's Sam Loveridge wrote, "Sayonara Wild Hearts hits me straight in the feels as hard as I'm about to send our heroine into the back of a bus." It's more than a rhythm action game, as it asks you to dodge buses and walls, chasing after glittering hearts and jumping over ethereal gaps in space and time - when done right you can pull off graceful, balletic movements. Add in an '80s synth pop soundtrack you'll want to beam directly into your skull, and you've got a truly great game.

If you're curious about the other games from this year that you should be checking out, head to our list of The Game Awards 2019 nominations.