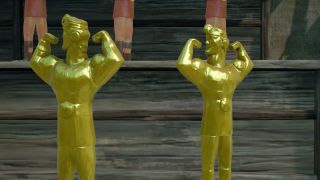 Head to the Thebes Alleyway, at the back of the Thebes Agora square across the fountain then take a left. Head inside the temple that is under renovation, and look to the boxes in the far back left corner to find this Kingdom Hearts 3 golden Herc figure.

Back up to the same Thebes Overlook save point and there's a golden Herc figure sat on one of the benches overlooking the world right in front of you.

From the Thebes Overlook save point, take the stairs down and run past the enemies that spawn until you reach some wooden scaffolding. Slide down the roof and jump onto the enormous stone shield being held by the statue. Another golden Herc figure is on the shield.

Head to the Thebes Gardens save point and run down the stairs. There's a golden Herc figure in one of the four mini craters here.

For the final golden Herc figure, turn around and go up the stairs. Before you scale the small wall, look to your right and walk past the man wearing pink. Head in the small building and you'll find the golden Herc statue on your left, stood on a bench.

When you've found all five, head back to the boy at the market stall in Thebes Agora. He'll be so happy he has his full collection back, he'll reward you with the Hero's Belt, which gives a moderate boost in Defense, and a small boost in Thunder, Water, and Aero Resistances.