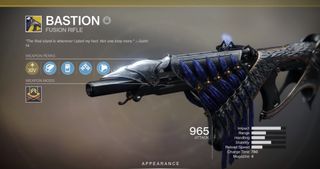 The Destiny 2 Bastion Exotic has arrived a bit ahead of schedule thanks to the community's herculean puzzle-solving efforts, and as of January 21, it's pretty easy to get. Bastion is the first and only kinetic fusion rifle, and on top of being drop-dead gorgeous, its rapid-fire projectile spreads make it fun to use. It's well worth getting - no data entry required - so we've put together a quick guide on how to get Bastion in Destiny 2.

How to start the Bastion quest, Memento

Originally, you had to complete a 30-room sequence in Corridors of Time to start the Bastion quest. Fortunately for players who weren't on the front lines, all you have to do now is talk to Saint-14 in the Tower, apparently after completing the Season of Dawn campaign missions to save him. However, the Corridors of Time will still be open through January 28, and we recommend navigating the lengthy path just to reach the lore moment at its end.

For those who are looking to make the trek, here's the 30-room sequence. Just enter the portals marked by these symbols in the following order.

How to complete the Memento quest

In spite of its complicated lead-up, the quest for Bastion is actually pretty simple. It's a straightforward kill-the-mans quest, to the point that there really isn't much room for error. Here are the quest steps with some added tips:

Return to Saint-14 in the Tower to claim Bastion and listen to another bit of time-bending exposition.