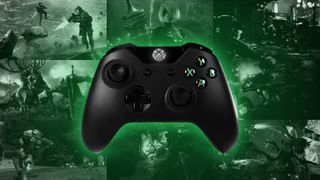 The world of the best Xbox One games is like pulling together the best minds in the industry. Over the six years since the console's original launch, this list has grown and strengthened. We've had developers continue to push the boundaries of what the console could do, and the resulting list of games is an impressive thing, even with Xbox Series X and the associated upcoming Xbox Series X games on the horizon.

The games that made it show the very best storytelling, action, visuals, multiplayer and gunplay that the Xbox One has to offer. They'll show you the console at its very best, and there's enough here to keep you very busy for a very long time. No matter what your preferred genre you'll find something to fall in love with, and a few suggestions that might push you out of your comfort zone to find something new.

So whether you've just bought into the Xbox family via an Xbox One S bundle or Xbox One X deal (or you're looking for your next batch of Achievements to chase), these games are guaranteed to impress. Without further ado, let's get into our picks for the best Xbox One games, which we'll keep updating as new releases prove they deserve a spot on the list. Oh, and be sure to check out our cheap Xbox game deals page if you see anything you fancy here - we're always on the lookout for bargains concerning the biggest and best Xbox One games.

The Final Fantasy name isn't exactly synonymous with Microsoft's console, but we're happy just the same as Final Fantasy 15 is easily one of the best RPGs of the year, and one of the best Xbox One games. It blends the vast open-worlds of Western RPGs with Final Fantasy's hallmark over-the-top anime absurdity to great effect, crafting a world based on the highways and byways of Middle America while filling that world with ferocious monsters, massive crystals, and powerful magic. There are times when Final Fantasy 15 feels like an idiosyncratic mishmash of ideas, but when you throw everything together - the strange world, the thrilling, real-time combat, the lovable characters who stick with you for your entire journey - it becomes something much greater than the sum of its parts. It becomes one of the best Final Fantasy games in ages; a game well worth the wait.

After delays that led to maybe just a touch of apathy, Cuphead is here and has instantly become one of the best Xbox One games of all time - especially if you like shooters. While the presentation is crafted beautifully from 1930 cartoon art - things like Betty Boop shorts and Disney's Silly Symphonies - this takes gameplay cues from sources like Mega Man, Contra, Metal Slug, and Gunstar Heroes. The levels aren’t huge but it’s the challenge, not the size that matters here as you dodge bullets and learn enemy patterns. Everything tests your skills and reactions in a range of interesting ways and, most importantly, are a joy to beat.

CDKeys
£15.49
View
We check over 130 million products every day for the best prices

*braces for complaints* Yes, we are well aware of the problems that plagued this particular entry, but now that it works, there's no doubting the craftsmanship here and its place in our best Xbox One games list. Bungie's genius meets 343's love in a package that truly does justice to an industry-shaking legacy. Buffed-up, revarnished and back in the shop window, The Master Chief Collection leaves us to wonder if Halo always looked so lovely. And you know what? It more or less did.

It's a little late to the Xbox One party but a wait that's been worthwhile as Nier: Automata - Become as Gods Edition, brings a 4K edition of Platinum's esoteric action adventure complete with DLC and extra costumes. It's a strange and unusual game about androids questioning the nature of existence via beating up robots and cleverly crafted homages to other games - when you're not mastering the acrobatic gunplay, the camera plays with angles that turn this into things like a topdown shooter, or aside scrolling brawler. Other interesting ideas see things like a chip system that lets you automate parts of the game you might struggle with. For example, if you're not great at dodging, an auto-evade chip can take care of that for you, while leaving every other facet of combat under your control. It's odd, inventive and fascinating game hitting Xbox in its most definitive edition.

GAME
£39.99
View
We check over 130 million products every day for the best prices

The first few minutes of a Rainbow Six: Siege match feel more like a slasher film than an all-guns-blazing FPS. The pitter-patter of combat booted feet sounds through the roof. Defenders erect Home Alone defences. Was that the whine of a rappel buckle? It's a sense of tension that beats most horror games. And once all hell does break loose, you're suddenly thrown into the midst of deep, strategical, brutally unforgiving warfare. Ripe with tactical options and built for "one more go" appeal, this is by far Xbox One’s smartest multiplayer shooter.

Halo's always been a balance of campaign with multiplayer, but this entry's a tad lopsided. The story of Locke chasing Chief isn't quite the era-defining moment we were hoping for but, luckily, it's the series-best multiplayer that gets our visors misty. Halo 5: Guardians offers so very much to prospective online warmongers. Arena is a return to the Halo of old, tense cerebral skirmishes that are an oasis of sanity in a sea of crude shooters. If you fancy some madness, then you have Warzone - mega-battles powered by a desperately addictive card-collecting system. And more's being added - 343 just reintroduced Big Team Battles and a new version of classic map, Blood Gulch for free. We're home.

24. Ori and the Blind Forest

Imagine a lavish, beautiful storybook world… that slams shut on your stupid, bleeding fingers for seven brutal hours. This is Ori and the Blind Forest, the result of Microsoft handing a group of retro fanatics enough money (and freedom) to make a worthy successor to the platformers of old, and creating one of the best Xbox Games ever as a result. Not only is this a pitch-perfect update to the formula set up by Metroid and Castlevania, combining mechanical satisfaction with tear-jerking narrative sequences, it's also quite probably the best-looking 2D game of all time. So yeah, it's pretty special.

There's always a big question for games like FIFA 19 in terms of what gets updated and how it's even possible to continually improve it yearly - somethings improve, others get worse, and sometimes nothing changes. All of which will annoy someone depending on their favourite part of the game. This year there are good updates to Champions League content, including the addition of the Chinese League for license completionists. There are subtle but evident on-pitch improvements such as a reduction in speed and a new timed shooting and a new physics system that takes some time to adjust to. Scripting still feels like it has the same issues as FIFA 18 with some sudden and unlikely comebacks in Squad Battles. And, with the exception of the Champions League, the career mode can feel like it hasn't changed a great deal year on year. You should be used to the ups and downs year on year though and there's little here to upset FIFA's place as the best football game around.

Amazon
£17.20
View
Show More Deals
We check over 130 million products every day for the best prices

Wolfenstein: The New Order is one of the most unique, brutal, brave, hilarious, and intelligent shooters of the generation so far. MachineGames' sequel, The New Colossus, confidently doubles down on all of that. Moving BJ Blazkowicz's very personal war further into the alternative-universe '60s, and transposing it to an America under Nazi rule, The New Colossus is uncompromisingly relevant. It's a smart, sensitive, and emotive discussion of callousness, prejudice, and cruelty, that nevertheless knows how to be fun at all times. A biting portrait of human failures and social horrors, that does its biting with big robot teeth and hatchet blades. It's a game that exemplifies heart and brains throughout, but never with more unremitting flair than when it comes to the noble art of tearing Nazis to shreds with bloody and balletic style.

Capcom has outdone itself with Devil May Cry 5, building off all the best bits of Ninja Theory's brilliant DmC in terms of aesthetic and style, then calling back to the series' beloved, finger-blistering history with its combo-heavy action and cast of fan-favorite characters. Our three heroes - Nero, Dante, and dapper newcomer V - all have distinct, over-the-top fighting techniques featuring fantastical weaponry (or animal companions, in V's case) for wildly divergent playstyles. Our Devil May Cry 5 review puts it nicely: "It looks better than ever, plays better than ever - it's Devil May Cry better than ever."

See the top 20 best Xbox One games by reading on!

Next Page The 30 best Xbox One games
See comments