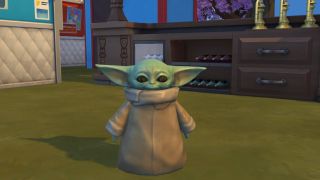 Baby Yoda is an unstoppable global phenomenon and the cutest one since Pikachu, and now he's taken over The Sims 4. The Child waddled into The Sims 4, without warning, as a statue that can be added to areas of your home you feel aren't sufficiently adorable.

'The Child Statue' is an item you can find in The Sims 4's buy mode under 'sculptures' - here's the official in-game description:

"Officially known as "The Child" but affectionately referred to as "Baby Yoda," this statue is a lovable replica inspired by the Disney+ live action series The Mandalorian."

To be clear, this isn't a player-created mod, Baby Yoda is an official addition to the game that was discreetly added by Maxis as part of The Sims 4's latest update. Quite simply, Baby Yoda can't be stopped.

How far will Baby Yoda go in his quest for worldwide pop-culture domination? Will he take on a virtual form in Half-Life: Alyx? Will he star in Kojima's next game? And why hasn't he been modded into Resident Evil 2 as Mr. X like that damned goose? Surely, it's only a matter of time.

Seriously though, it is slightly unsettling that the affectionately doe-eyed, cooing Baby Yoda now adorns countless virtual dressers and nightstands in this stiff, lifeless form. Then again, that won't stop Baby Yoda Hasbro merch from selling out like Furbies on Christmas Eve 1998.

If you can't decide on a Christmas gift this year, Disney Plus Gift Subscription Cards ensure plenty of Baby Yoda, and who wouldn't want that?