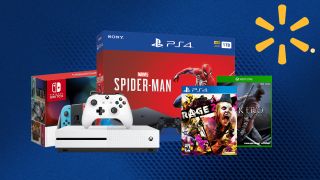 Black Friday rekindled the best Walmart game deals, and they're going fast. We've still got a few days left on the hardware deals, but bundles are selling out quickly, and most of the retailer's game deals will end on November 30. That said, there are still plenty of great deals left on plenty of great games, so it's still an excellent time to buy.

PS4 Pro + CoD: Modern Warfare | $299 at Walmart (save $100)
PS4 Pro deals are generally scarce, and the Modern Warfare reboot is barely a month old, so this bundle is a tiny miracle. Save big on a beefy PS4 Pro and one of the best Call of Duty games in years.  View Deal

PS4 Pro 1TB | $299 at Walmart (save $100)
If you aren't interested in Call of Duty: Modern Warfare - or you're having trouble finding its bundle in stock - you can still get a great deal on the PS4 Pro itself. View Deal

PlayStation VR 5-game bundle | $299 at Walmart (save $100)
*This bundle is back to $299, but we're hoping the price will drop again soon.* Get everything you need to play PSVR games and five amazing games to play immediately: Skyrim VR, Resident Evil 7, Astro Bot Rescue Mission, Everybody's Golf VR, and PSVR Worlds.  View Deal

Xbox One S + Star Wars Jedi | $199 at Walmart (save $100)
The Xbox One S is the best version of the base Xbox One, and Star Wars Jedi: Fallen Order is a brand-new, superb action game. Together at this price, they make for a fantastic pair this Black Friday. View Deal

Other Walmart Xbox One deals

Nintendo Switch Joy-Con pair | $69 at Walmart (save $10)
Joy-Cons pretty much never go on sale, so even a $10 discount is a big deal. This price is available for red-blue, pink-green, and gray pairs. View Deal