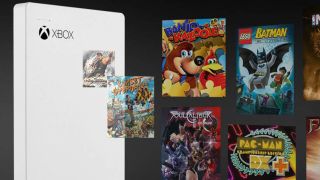 Remember when one whole GB seemed like all the storage space you could ever need? Ah, the folly of youth. If you’re struggling to find room for your games and other downloadable gubbins, Amazon has kindly slashed the price of Seagate’s official Xbox One 2TB external HDD to $69.99. That’s a reduction of 22% - not bad for one of the best Xbox One external hard drives out there. As a happy bonus, it also comes with one month of Xbox Game Pass. As a result, this is probably one of the better offers we’ll see before Prime Day arrives next month.

2TB Seagate External Hard Drive | $69.99 on Amazon (save 22%)
This good-looking drive will give you loads of space for Xbox Game Pass games at a lower-than-normal price with $20 off.View Deal

No matter what extras you get with it, investing in an external hard drive is never a bad idea. For example, downloading those free monthly games via Xbox Live deals will fill up the console’s internal memory faster than you might like. That’s especially frustrating if it means you’ve got to delete a game you may come back to later (such as the constantly evolving Destiny 2 or Fortnite). Seagate’s drive provides a neat solution to the issue; besides offering extra TBs of space, it lets you shunt storage squatters like Bungie’s shooter elsewhere without deleting them entirely. Seagate’s a reliable brand, too, so you know you won’t go far wrong with it. And hey, who can say no to a cheeky saving? Having a little extra cash lying around will definitely come in handy when the Amazon Prime Day game deals arrive this July.

For more Xbox-related bargains, don’t miss these cheap Xbox game deals. As well as price-cuts on hits such as The Division 2, you can also get rad Xbox One accessories there for less than normal.