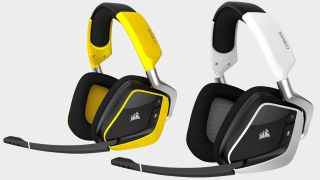 Cheap gaming headset deals are not rarities in and of themselves, but when said deals feature some quality products, it's well worth sitting up and taking notice. Which is what these are. Right now there's a trio of quality Corsair headsets on offer at Best Buy. These represent the lowest prices we've seen for the headsets so if you've been on the lookout for a deal, then these are seriously worth considering. These are perfect for gaming on PC particularly, but are also compatible with PS4, and, with the help of a Microsoft adapter, with Xbox One too (Void Pro RGB wired only).

Corsair VOID PRO RGB wireless gaming headset | White | $49.99 at Best Buy (save $50)
This is probably the set that offers the biggest bang for buck as its fully wireless, fully RGB and fully excellent.View Deal

While compatible with some consoles, Corsair's headsets very much sit within the realm of the best PC headsets for gaming. If you're specifically after one that's optimised for the major consoles then you're better off heading over to our guides below.

For more offers on all things small, don't forget to check out the best PS4 accessories and Xbox One accessories - they'll get you set up with all the cheap peripherals you need.