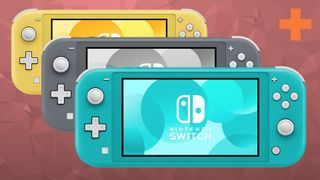 If you didn't wind up getting a Switch over the holiday season or were put off by the cost, your best bet may be to hunt down a good Nintendo Switch Lite price. This new version of the console is a lot cheaper, and it's compatible with all Switch games (including Mario Kart 8 Deluxe and The Legend of Zelda: Breath of the Wild) so you won't be missing out on things to play.

Cheap Nintendo game deals
Get your hands on the hottest games at the lowest prices (UK users, click here).

To get you started, we've gathered together the best Nintendo Switch Lite price, savings, and bargains. You'll find these below, and this page is regularly updated with the most recent offers. In other words, be sure to pop back every now and then if you don't find any discounts now.

But why choose the Nintendo Switch Lite in the first place? And what makes it a better choice than the best Nintendo Switch bundles? It comes down to price and portability. The Lite is a good $100 / £100 less expensive than the original model, a fraction smaller in size, 22g lighter, and focused entirely on handheld play. Although that means it can't be connected to your TV (and only displays in 720p resolution), it's much more affordable and easier to transport. What's more, its controllers are part of the casing so won't get lost while you're out and about. Sure, the Lite is no good if you want to play multiplayer Mario Kart on the big screen. But if you're keen to buy a cheap way into Nintendo games or your kid's first console? The Switch Lite's perfect. Because it's more affordable, the Switch Lite also leaves you with more cash to spend on anything else you might need - Nintendo Switch accessories or Nintendo Switch SD cards to boost the system's 32GB memory, for instance.

No matter which version of Switch you go for, it's well worth grabbing a few key Nintendo Switch accessories along the way (especially over November when Black Friday game deals kick in). As well as more obvious extras like the best case for Nintendo Switch or the best Nintendo Switch headset, it’s a good idea to look out for a Nintendo Switch SD card too. Both consoles only come with a meagre 32GB of memory as standard, so you'll need something a little bigger to make sure you don’t run out of space.

$19.49
View at Amazon
$22.95
View at Walmart
$24.99
View at Adorama
See all prices (4 found)
Relatively cheap
Plenty of storage space
Will last you a while
Easily lost

One of the few issues with any Nintendo Switch is its lack of storage space. The Switch Lite is no different. It's a pain when you grab a new game but have no space to install it or save your progress without deleting something else, so the SanDisk Ultra 128GB SD card is a must-have. While there are bigger and smaller alternatives, this one only costs around $30 and quadruples the Switch's internal memory. That should allow you to store between five and ten big games.

Because of the Lite's portable nature, you’re likely to be carrying it from place to place in the great outdoors. To keep it safe, a carry case is essential. Orzly cases for the original Switch are excellent, so grabbing the Lite version (which can come in matching colors, by the way) is a no-brainer. The hardened outer shell contains plenty of room for your console, games, and any other accessories you might want to take with you on the road.