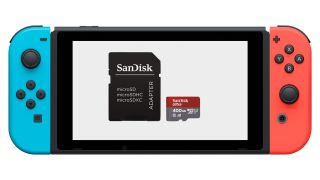 When I bought my Nintendo Switch at launch two years ago along with a 128GB microSD card, I didn't realize how fast my game downloads would fill it to the brim. At the time of this writing, I have only 23 games in my library and I've already had to remove three of them. As it turns out, 128GB isn't enough. But even just two years ago, anything more capacious than a 128GB microSD card would have set me back a small fortune, unless I was comfortable buying from shady, untrustworthy brands I've never heard of.

Nowadays, though, a 400GB microSD card costs a fraction of what it once did. In fact, right now you can buy one on Amazon for $77.90, 19% off its original list price. With that amount of storage spring-loaded inside your Switch, you could install The Legend of Zelda: Breath of the Wild nearly 30 times. However, since Nintendo doesn't let you install the same game on a single console more than once, realistically, you're looking at a card that can store up to 30 games of your choosing, as long as each one takes up 13GB or less. Sadly, you're limited to a glaringly smaller quantity if one of those games is the chonky 31.5GB NBA 2K19.

SanDisk Ultra 400GB microSDXC for $77.90 on Amazon
Why overspend on storage when you don't have to? This 400GB SanDisk microSD card is from a brand you've heard of and it'll store a great deal of even the most complete Switch libraries.View Deal

Because it ships with a full-size SD card adapter, the SanDisk Ultra microSDXC card in question is perfect for taking screenshots and capturing gameplay videos as well. Though we're starting to see laptops and desktops eliminate native SD card slots altogether in favor of USB-C dongles, legacy users will appreciate the ability to simply slide the microSD card into a larger adaptor and then into their computers in order to edit their saved content before uploading and sharing it online.

Since this SanDisk microSD card in particular normally retails for $95.99, and others on Amazon seem to go for upwards of $140, $78 is a small price to pay for the luxury of convenience and expansion. For more Switch storage deals, check our suite of recommendations for Nintendo Switch SD cards.