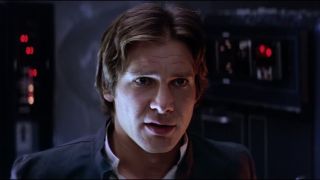 It’s time to feel the galactic need for speed. No, it’s not Top Gun 2 (though that’s definitely a thing now), it’s part deux of Han Solo in a speeder for the Han Solo movie. He’s going much faster than the last time we saw him and, hey look, there’s even a drone and another vehicle chasing him in the latest video. Neat-o.

The sequence comes from Making Star Wars and, if you excuse the terrible choice in music, you’ll be able to see Han speeding off into the distance with a giant vehicle in pursuit, plus a drone. That’s probably there for a few really cool shots of Han escaping/racing/going for a leisurely drive.

Han is apparently sharing his speeder with a female passenger. Could it be the Mother of Dragons herself, Emilia Clarke? We know next to nothing about her role so here’s hoping we find out something, anything, about what she’s doing in the Han Solo movie.

It’s also pretty fun to see Star Wars go all-in on a ground vehicle sequence again. Space battles are all well and good but nothing beats a bit of intergalactic wheel-on-wheel action.