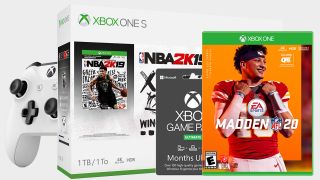 Both Walmart and Amazon have currently got some great Xbox One bundles going - particularly for sports lovers. Just in time for the beginning of this year's NFL season you, the headline in these deals is getting Madden 20 for free. But that's not all.

The Walmart deal bags you an Xbox One S, a bonus wireless controller, NBA 2K19, a one-month Ultimate version of Xbox Game Pass and Madden 20 for just $299. That saves you a tidy $62. Meanwhile, the Game Pass membership on its own will provide over 100 other games so long as you remain subscribed. Which makes this one of the best Xbox One S bundles at the moment, by the way. You're getting a tremendous amount of value here.

Amazon's deals aren't necessarily quite as packed, but they do feature more recent games. For example, they're offering an S console with NBA 2K20 and Madden 20 for only $300. Similarly, you can get Madden 20 with the Xbox One S Battlefield 5 bundle for a reasonable $224. There's even a price cut on an Xbox One S All-Digital bundle, giving you Madden 20, Minecraft, Forza Horizon 3, and Sea of Thieves for just just $208 - significantly less than normal.

Would you prefer Xbox One X deals instead? No problem. Amazon's still giving away Madden 20 free with an X console and NBA 2K20 for the grand total of $500. That's usually the price of an X on its own, so getting the new Madden for your trouble isn't bad going.

1TB Xbox One S + bonus official controller + Madden 20 + 1 month Ultimate Xbox Game Pass + NBA 2K19 | $299 at Walmart (save $62)
This bundle packs in an awful lot of value. Although you're receiving two games right away, you're also getting a lot more thanks to that Game Pass deal. View Deal

1TB Xbox One S All-Digital Edition + Madden 20 + Minecraft + Forza Horizon 3 + Sea of Thieves | $208 on Amazon (save over $50)
While the All-Digital is a little more specialised than other varieties of Xbox One S (it has no disc-drive), it is a lot cheaper than anything else here. View Deal

1TB Xbox One X + Madden 20 + 1 month Ultimate Xbox Game Pass + NBA 2K20 | $500 on Amazon (save over $40)
If you want maximum horsepower, this Xbox One X bundle is the way to go. It allows you to play in super-sharp 4K resolution and HDR, giving you some of the best console gaming pictures going.View Deal

Once you've decided on a console, it's worth heading over to our page of cheap Xbox game deals to see if you can get a discount on the latest must-have games. Don't forget about your Play and Charge Kit either - you can find that for less in our guide to the best Xbox One accessories.