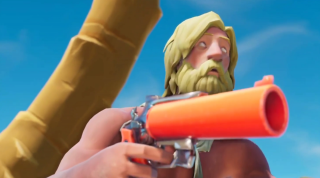 Tons of speculation across the internet popped up after a flare gun was shown in a cinematic during the recent Fortnite pro-am. The cinematic shows the fan-favorite character Jonesy struggling to survive on a deserted island. He sees the battle bus flying overheard and tries to shoot a flare gun to get the driver's attention but ends up shooting the whole bus down instead.

He ends up with a victory royale for taking out every other player on the bus, so it's not a complete loss.

Soon after the cinematic aired many players started to wonder if the flare gun would come to the game soon. Epic Games senior public relations representative Nick Chester tweeted "no" in response to a Dexerto article on Twitter.

Many fans questioned what purpose a Flare Gun could have, citing that it wouldn't be any use in combat. However, PUBG added a flare gun that summons a personal supply drop to whoever fires it. It's a rare item that adds an interesting twist to the game. It could work well in Fortnite and add some flavor to the long stretches in the middle of a match that can be a tad boring.

Fortnite gets new weapons all the time, including the recent Shadow Bomb and Storm Flip, so it's not unlikely that we'll see a Flare Gun at some point. It might not be anytime soon, though.