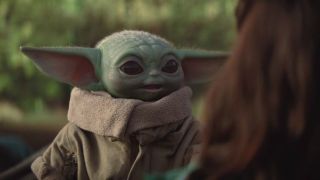 It's a bit early to say it, but maybe 2020 will turn out just fine, considering there's The Mandalorian Baby Yoda toy coming to Build-A-Bear. The news was announced during the ICR Conference (an investment conference featuring public and private companies) in Orlando, Florida by Build-A-Bear CEO Sharon Price John. And (wait for it) she even held up a prototype of the Baby Yoda Build-A-Bear. Squee! Check out the very blurry pic snapped at the conference below.

Business Insider reported that Build-A-Bear started the collaboration process with Disney and LucasFilm right around when the first episode of The Mandalorian dropped on Disney Plus. "I'm excited to share we will be one of the first companies to provide the digital and internet phenomenon who is trending higher than all the presidential candidates combined," John said at the conference. I bet Baby Yoda's 2020 ballot includes universal health care…

There's no release date for The Child Build-A-Bear, but expect it sometime in the next few months. For context, most of the other Baby Yoda merch we've seen isn't shipping out until the springtime (I would know, as I ordered a bunch of the Hasbro merch that's not coming until May). And there's no confirmation that you'll be able to build your baby with soundbites from the show, but I wouldn't be surprised, as Build-A-Bear already has official Star Wars sounds available for your cuddly buddy including the theme song, Darth Vader noises, and Wicket the Ewok clips.

The magic (or horror) of Build-A-Bear is choosing and stuffing your very own stuffed animal, and if you were a child between the years of 1997 and now, you've probably been to the Workshop, even if it's just to window shop. I'm quite certain the Baby Yoda Build-A-Bear will result in long lines and wild eBay resales, and I'm fully prepared to stand toe-to-toe with a six-year-old over the last Baby Yoda plushie.