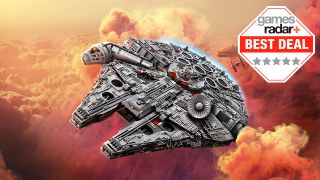 The Black Friday game deals are a great opportunity to get a bargain on everything from 4K TVs to game consoles, but you can also score some cheap LEGO deals if you know where to look. For example, there are currently a ton of offers on LEGO sets that could save you a tidy sum. One of the most notable would be the LEGO Star Wars Ultimate Millennium Falcon set with  significant £81 off its price. That discount brings it down to a still-eye-wateringly-expensive £548.67, but it's also the kit's lowest ever price. Elsewhere, you can get the A-Wing Starfighter set from Rise of Skywalker for only £22.10 on Amazon, the original trilogy's Death Star escape for £19.98, or Anakin's podracer for £18.99 (a reduction of 24%). That's pretty great value for money, especially if you want a memento for your desk or a gift for the Star Wars fan in your life.

If the larger Millennium Falcon is still a bit much in terms of cost (believe us, we hear you), the smaller version from John Lewis is a much more affordable £117.97. And there are cheap LEGO deals outside of Star Wars, too. The LEGO Hogwarts Castle from Harry Potter has been heavily discounted by to £279.99 at John Lewis, for example, and that's a saving of 20%. This is another massive build with over 6,000 pieces to its name, and it's the closest we'll get to the School of Witchcraft and Wizardry without visiting the Harry Potter Studio Tour. Meanwhile, the LEGO Friends Central Perk kit is back in stock on the LEGO Store, and it's awesome. Finally, Minecraft has also gotten some love with up to 40% off on certain sets.

LEGO Star Wars Ultimate Millennium Falcon | £548.67 at John Lewis (save £81)
If you're a Star Wars and LEGO fan, prepare yourself: this is the Holy Grail of one meeting the other.View Deal

LEGO Star Wars Resistance A-Wing Starfighter | £22.10 on Amazon (save 12%)
Although it's not a mind-blowing saving, getting any money off a cool Rise of Skywalker sets is always welcome.View Deal

LEGO Star Wars Anakin's Podracer | £18.99 on Amazon (save 24%)
Say what you will about The Phantom Menace, but the podrace was a standout scene. Honour it with this cheap set.View Deal

LEGO Star Wars Death Star Escape | £19.98 on Amazon (save 20%)
Recreate the iconic Death Scar bridge escape on your desk or at home with this cool (and discounted) set. View Deal

LEGO Star Wars Millennium Falcon Starship Construction Set | £117.97 at John Lewis (save 22%)
Want the Millennium Falcon but not at £500+? This is a smaller alternative with minifigures based on Rise of Skywalker.View Deal

When it comes to the Ultimate Millennium Falcon, all those pieces in both kits make up an incredibly accurate model with individual screen-accurate rooms, ramps, landing gears, and a removable roof so you can peer inside the iconic hunk of junk (with that in mind, it's easy to see why the LEGO Star Wars Ultimate Millennium Falcon is such a highly sought-after collector's item). What's more, this cheap LEGO deal draws on the Falcon's long history in the Star Wars universe by including minifigures from the original trilogy (Han Solo, Leia, Chewbacca, and C-3PO, not to mention one of those creepy bat things from inside the space worm) and some from the new series, including an older Han Solo, Rey, Finn, BB-8, and a couple of Porgs for good measure. You can add the new trilogy's rectangular satellite dish as well, if you'd prefer.

See these LEGO sets in all their glory below.

This is just the start of Black Friday offers, of course. Because it's not just one day anymore; it's a solid couple of weeks of non-stop deals, which is only a good thing for those wanting to save cash. Don't worry about doing the legwork yourself, though. GamesRadar+ has done the hard work and you'll find the hottest offers on-site between now, December 6, and beyond. For example, you can find the cheapest Black Friday TV deals in our dedicated hub.