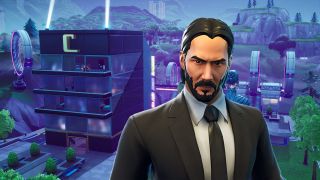 The Fortnite John Wick LTM is here, bringing with it the One Shot glider, Boogeyman wrap, and Gold Coin back bling for those who complete enough of the Fortnite Wick's Bounty Challenges. Technically this is event marks the pencil-abusing assassin's debut in the game - of course, some will argue that Fortnite already has a John Wick in the form of the Reaper skin, but this time the John Wick skin is official to tie in with the release of John Wick Chapter 3: Parabellum.

The Wick's Bounty Limited Time Mode is a squads deathmatch, with each team trying to collect Gold Tokens by eliminating opponents. You can survive three eliminations before you're out of the game, but the token leaders are shown on the map for everyone else to target so it doesn't necessarily pay for your squad to streak off ahead. Help your team reach their target token count to win, and you could be adding some new assassin-themed goodies to your locker.

Want to see what the biggest changes are in Fortnite Season 9? We've got all the locations and secrets in our video below:

Of the six Fortnite Wick's Bounty Challenges, four of them give you a standard 500 XP award which isn't much to get excited about, however the other two are more interesting. If you play five matches of Wick's Bounty then you'll receive the Boogeyman wrap for your weapons and vehicles, and for actually being on the winning squad for a match you'll unlock the One Shot glider to fly in on. Unsurprisingly, both of these are sleek and black. If you complete any five of these challenges in total you'll also collect the Gold Token back bling, to show off your assassination skills to everyone.

Now the Fortnite Wick's Bounty LTM has been released we can confirm the challenges and rewards list:

Most of these you'll just achieve cumulatively if you play the Wick's Bounty LTM enough times, especially if you focus on using the new Combat Shotgun and Tactical Assault Rifle weapons. Collecting Gold Tokens seems to count those from your entire squad, rather just your own personal bounty collection, and we managed to rack up 40 of them in our first match without really trying. As for winning a match, this is going to depend on how your team stacks up, but if you keep plugging away and do your part then it shouldn't take long to see that Victory Royale screen.

Check out our Fortnite map guide for the best places to land, find chests, and get started in Season 9.