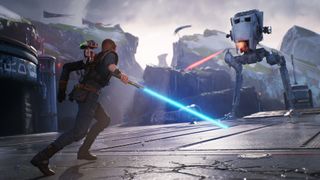 Last month, we thought Rudeism's wild controller builds couldn't get any better - GamesRadar+ shared his Untitled Goose Game controller that featured functioning flippers and gloves he could use for flapping. But there's nothing more satisfying than wielding a lightsaber, and since Star Wars Jedi: Fallen Order gets the lightsaber mechanics so right, it's a match made in unorthodox gameplay heaven.

The lightsaber in question is your typical toy store replica that's been retrofitted for motion inputs that translate to in-game strikes, so every swing of the toy lightsaber makes Cal Kestis swing his lightsaber. And since the in-game lightsaber mechanics simply require you to press a button, it doesn't matter which way the saber-controller is swung, as Cal will string together the badass Jedi moves on his own. That means you can swing it like a baby padawan wearing a blindfold and still connect with a Stormtrooper's neck.

Rudeism also built a custom glove controller that allows him to use Cal's force powers simply by moving his hand. He literally pushes his palm out as if he's executing a Force Push and Cal does the exact same thing in-game. It's absolutely wild and would fulfill so many fantasies if it were available to the public. I'm just saying, Microsoft or Sony, let's make some moves here.

For now you'll only be able to enjoy Star Wars Jedi: Fallen Order in the traditional controller or mouse and keyboard manner, but this is a pipe dream many of us will hold onto.

We can't get you a motion controlled lightsaber controller, but we can get you the best Black Friday game deals.