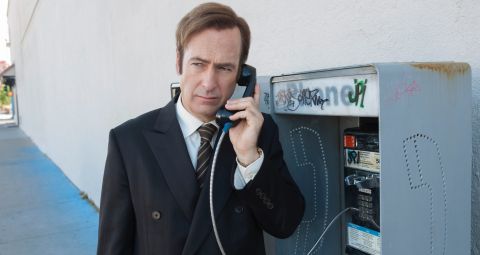 By the high standards of the Breaking Bad universe, “Nacho” is a little disappointing.

That’s largely because it hangs on a mystery – the disappearance of embezzler Craig Kettleman and family – that turns out not to be all that interesting. Jimmy cracks the case pretty easily (simply by wandering round the woods at the back of their house). And it seems implausible that he gets the chance. It makes sense that Kim would press for Jimmy to be allowed to visit the scene – she thinks seeing the family home will prick his conscience. But would the cops let the attorney representing the suspect into the property? This is assumed to be a crime scene, after all. Still, this kind of thing never got in the way of Quincy’s investigations…

The song heard as Jimmy looks for the Kettlemans is “Find Out What's Happening”, a 1967 single by country singer Bobby Bare.

The episode does have its pleasures, though, and they’re chiefly to do with character. The flashback to Jimmy’s past, when he was estranged from his brother and clearly headed for a life of crime, is intriguing; it’s very entertaining to see him struggling to do the right thing by the Kettlemans (he may be “no hero”, but as we saw in episode two, he’s a good enough man not to just stand by and let innocent people die); and it’s also pleasing to finally see Mike Ehrmantraut being given a bit more prominence. One of the minor frustrations of the first two episodes was seeing Mike sidelined – it’s a bit like having one of your star strikers sitting on the subs bench – so it’s good to see his relationship with Jimmy finally starting to develop beyond a cartoonish, two-dimensional petty enmity.

Jimmy continues to show his love of ‘70s cinema: after Network and Cabaret, it’s the turn of The Shining. “Heeeeeeere’s Johnny!”

What exactly did Jimmy to do to end up in jail that involved property damage, assault charges, and the possibility of being branded a sex offender? It was “a simple Chicago sunroof”, he says. Sounds like it should the name of either a scam (like The Spanish Prisoner) or a sexual position, but it seems its his own coinage.

If the area of Saul’s search looks vaguely familiar, it’s probably because it was shot near where Walt shot Mike in Breaking Bad’s “Say My Name”.

Jimmy goads Mike: “Oh yeah, what ya gonna do? You got a poop-filled diaper in there, ya gonna throw it at me? Ya gonna gum me to death, huh geezer?”