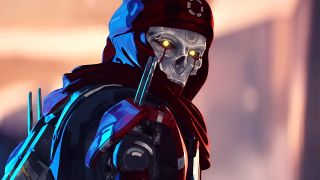 Apex Legends season 4: Assimilation is so close we can taste it. The long-awaited season is dropping February 4 (the one year anniversary of Apex Legends) and it's bringing a brand-new character, map changes, and more.

Despite the devstream from last month, the next Legend is not the buff, former professional fighter named Forge. In a wild bait-and-switch, the character trailer for Forge featured the smooth-talking, corporate-sponsored Legends getting brutally murdered by Revenant, the Legend we've been all been waiting for. Revenant has been teased for quite some time, and even played a major role in the Fight or Fright Halloween event, but he's finally debuting in season 4: Assimilation. And he's bringing some game-changing abilities with him.

From Revenant's abilities to map changes, here's everything you need to know about Apex Legends season 4.

The newest, scariest Legend to leave the dropship is Revenant, and he's got a host of new abilities that are like nothing we've seen before in the arena. As we previously reported, Revenant's abilities seem to classify him as an assassin type, and are wildly different from any other Legends'.

Check out all of Revenant's abilities below:

How many people play Apex Legends?

World's Edge is shifting dramatically, as a giant Hammond Robotics harvester has dropped smack in the middle of Capital City, splitting it in two. The Planet Harvester, used to gather precious metals from a planet's core, has drastically affected the unstable planet, causing giant lava fissures to rupture.

As EA reports in their season 4 map update, Capitol City "was the biggest POI in season 3, getting the most action right out of the ship" (I can attest to that). The Harvester has split the hot zone in two, and even swallowed an entire building, with the intention of creating two separate zones (called Fragment East and Fragment West). You'll only be able to cross the fissure in two places via a zipline or a fallen building that spans the gap.

Don't worry about falling in that gap though, as there's an updraft that will slowly carry you back up to the top. However, you'll take 25 damage from the heat and fire, and you'll move so slowly you're "essentially a flying loot pinata for any nearby enemy players."

There's also a small new area called Survey Camp, which you'll find between the Epicenter and Skyhook. Inside the Survey Camp are brand-new weapon racks, similar to the ones in Firing Range.

Season 4 is bringing a brand new sniper rifle to a map that's built for it: meet Sentinel, a bolt-action rifle.

The Sentinel includes a special charge mechanic which will let you customize your shots, from quick blasts to slower shots to charged up rounds that will do some serious damage.

Apex Legends' ranked mode is getting a revamp, with ranked play divide up into two periods, the first of which starts on February 4. Halfway through season 4, the first period will end, resetting your progress so you can head into the second half completely refreshed.

But here's the biggest takeaway from this split ranked season: each period will take place on different maps. The first ranked mini-season takes place on World's Edge, while the second brings you back to King's Canyon. Your rank at the end of season 4 will be determined by the highest rank you earn in either split (as in there's a soft reset in between the splits).

There's also a Master Tier joining the mix, with Apex Predator ranking becoming the top 500 players by platform. Plus, dive trail rewards are now seasonal, but series 1 and 2 players are grandfathered in, and you'll get some super cool gun charms for each rank.

To celebrate the game's first birthday, Respawn will be doling out some goodies, including a paper crane gun charm, and a new badge that will differ ever-so-slightly based on when you started dropping into the game. You can also enjoy a limited-time XP boost and a few other rewards that the devs have yet to reveal.

All in all, there's a lot to look forward to when Apex Legends' rings in its first year anniversary with season 4, on February 4 of all days. Catch you on the drop ship.

Apex Legends Rosie may well have been teased in a recent trailer.