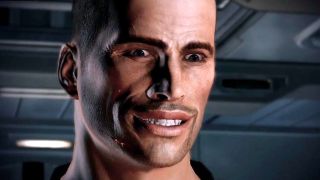 Our prayers have been answered and our calibrations are complete. According to Kotaku, BioWare Edmonton is working on a new Mass Effect game under Mike Gamble. Gamble has been at BioWare since 2009 and worked on Mass Effect 2, Mass Effect 3, and Mass Effect Andromeda before switching over to the Anthem team, but it looks like he's returned to his roots.

Recently, the Mass Effect community celebrated N7 Day with the usual reminiscing and revisiting of the original Mass Effect trilogy coupled with the now redundant requests for BioWare to give us a new game. GamesRadar+ reported that BioWare's own Casey Hudson seemed to be teasing a new Mass Effect game when he tweeted out a collection of concept art with the caption, "We have so many ideas for things we want to do in #MassEffect, so much concept art that hasn't yet been brought to life, and so many stories yet to tell." At the time, it seemed too good to be true.

But now, it's looking more and more like it might be a reality. The Kotaku piece concludes with a single line that, for many, means Christmas has come early: "In addition to the much-anticipated Dragon Age 4, which BioWare teased last year, a new Mass Effect game is in very early development at the Edmonton office under director Mike Gamble, a longtime BioWare producer." Very early development is better than no development at all, am I right?

Hudson's somewhat cryptic N7 Day tweets seemed to feature solely concept art set in the universe of the original trilogy, as there's two distinct depictions of the well-known Normandy ship featured in the artwork. But, many feel like the Andromeda storyline is incomplete. So, just where in the Mass Effect universe this reported game will be set is unclear as of yet.

The brief, but huge, Mass Effect news came at the end of a lengthy report about an alleged Anthem update that would include overhauling huge components of the game in a similar vein to No Man's Sky.

These Black Friday game deals are definitely past the point of very early development, and we're keeping them updated frequently to get you the best deals in the galaxy.