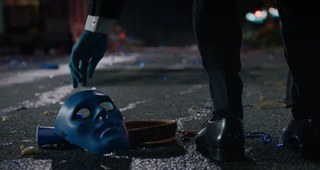 With Game of Thrones long finished, HBO are looking for their next ground-breaking television show. Step forward Watchmen, the new series from Lost and The Leftovers mastermind Damon Lindelof.

Rather than adapt the iconic graphic novel panel for panel (as Zack Snyder did with his 2009 movie version), Lindelof is instead "remixing" the source material to tell a different tale with the same DNA. And in the new trailer, released at San Diego Comic-Con, that DNA is fully on display with an appearance from Dr. Manhattan being teased. Watch the trailer below.

Writing about adapting Alan Moore’s Watchmen on Instagram, Lindelof noted (via The Verge): “We have no desire to ‘adapt’ the twelve issues Mr. Moore and Mr. Gibbons created thirty years ago. Those issues are sacred ground and they will not be retread nor recreated nor reproduced nor rebooted.”

The original graphic novel centred on a group of American vigilante heroes working within the Cold War era. The news series looks set to update that setting but will still centre on a group of masked heroes and villains. "People who wear masks are dangerous," says one man in the trailer. "We should be scared of them."

No release date for the Watchmen TV series has been announced, though it is expected to debut in the fall.

For more clips from SDCC, head over to our SDCC 2019 trailers hub, and take a look at the San Diego Comic Con 2019 schedule so you know exactly what to expect in the days ahead.