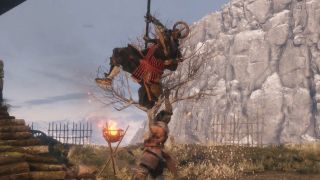 The Sekiro Seven Ashina Spears boss is one of the harder challenges in the game, so don't expect to sort him out in a single sitting. You do at at least get one sneak attack opportunity to take away some health but with other guards to worry about and a confined fighting space, it's a tough slog to see him through. Especially as countering a spear is even tighter than swordplay in Sekiro. So read our advice on dealing with the Sekiro Seven Ashina Spears boss and get ready.

How to beat the Sekiro Seven Ashina Spears boss

There will be a lot of the Mikiri Counter in this fight, so get used to the technique before taking him on. This is also another boss who really takes a beating if you use the oil and Flame Vents combination. Does it feel cheap? Yes. Does that matter? No.

His unblockable spear thurst (Mikiri Counter) tends to be followed by an attack even if you do counter it, so always be prepared to parry a follow-up attack. He also uses a large sweeping attack which can be punished by jumping on his head in order to deal a large chunk of posture damage.

His combination attacks have peculiar timing due to his technique with the spear he wields. A lot of this fight is simply staying on the defensive rather than trying to attack him outright. A posture kill is going to be more manageable than a vitality one. That being said, chuck some oil at him and use the Flame Vents to make this fight almost laughable.

Given how challenging this fight is there is no shame in returning again later on when you have more health and can deal more damage. It is fully optional but is worth doing for the Prayer Bead he drops.