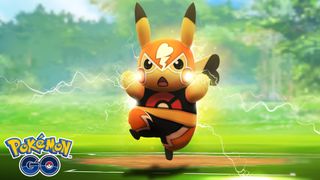 With the recent introduction of the Battle League, you can now get a Pokemon Go Pikachu Libre, decked out in the iconic luchador outfit. This stylish Pikachu adds a little more flavour to the classic yellow mascot than the simple hats we've seen in the past, but that means it also has a special acquisition method. If you're a Pokemon Go player wondering how to get Pikachu Libre, let us explain.

How to get Pikachu Libre in Pokemon Go

⚡⚡Pikachu alert! ⚡⚡Clad in a wrestling-themed costume, Pikachu Libre will be making its Pokémon GO debut. You can encounter it exclusively by participating in the #GOBattle League once Season 1 begins! pic.twitter.com/MCtpaOwqHLFebruary 5, 2020

In order to get the Pikachu Libre in the luchador outfit in Pokemon Go, you need to partake in the first season of the Pokemon Go Battle League. The problem is however, you can't obtain Libre Pikachu until Season 1 of the Go Battle League. Right now, we're in pre-season and there's no confirmed start date for Season 1, but we do know that pre-season will continue until at least March as per an official blog post.

This means that right now, we're not sure of the exact method used to obtain Pikachu Libre. We do know however, that Pikachu Libre will know the move Flying Press, which is exclusive to Libre Pikachu and Hawlucha (which isn't in the game yet). If you participate in Season 1 of the Battle League enough then you'll eventually get this fighting Pikachu, but that could be five wins or 50; right now there's no telling. We'll be sure to update this guide as soon as the method is revealed however and until then, keep battling in pre-season to practice.