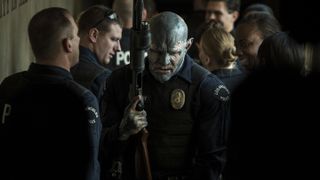 No, Netflix hasn't quit the entertainment industry and set up a weird police force staffed by orcs (what would they even enforce, anyway?) - it's simply released some first look images for its new Original movie Bright, albeit in a slightly unconventional way. Check out the press release below:

Today, the South Central Los Angeles Police Force announced that Nicolas Jakoby, the first ever Orc Police Officer, joined the department solidifying their commitment to diversity and their acceptance of all communities and races. Jakoby will be partnering with the esteemed Human Officer Scott Ward and providing much needed insight into the Orc community in the Los Angeles area.

“Orcs have been a part of our society for over a millennia and we welcome all who are ready and willing to serve on the force. Jakoby will be an excellent partner to Ward.” Said Captain Perez.

Things can happen on the streets.

Be careful who you trust.

You can take a closer look at Officers Jakoby and Ward (played by Joel Edgerton and Will Smith respectively) in the new images below:

If you're not sure what Bright is about (and you missed the trailer), let me fill you in. Set in an alternate present-day where humans, orcs, elves, and fairies have been coexisting since the beginning of time, Bright is directed by Suicide Squad’s David Ayer and follows two very different cops as they try and save a female elf (Prometheus’ Noomi Rapace) and keep an important relic out of the wrong hands. It basically sounds like the dark, fantasy action movie we've been waiting for, right?

Directed by David Ayer and starring Will Smith, Joel Edgerton, and Noomi Rapace, Bright will hit Netflix at some point in December 2017.