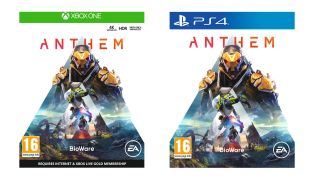 BioWare's latest open-world adventure where you play a freelancer may have had quite a turbulent time of it since launch, but with improvements on the horizon, you can drop just £5 to get a copy on PS4 and Xbox from Currys this Black Friday.

Anthem takes place on an unnamed planet under threat. A faction known as Freelancers work to try and save humanity equipped with their mecha-like exosuits known as Javelins. You can team up with three other players in its online multiplayer world, or go it solo.

Anthem on PS4 | £4.97 from Currys (save £25.02)
Experience Anthem on your PS4 for less than a fiver and be the best Freelancer you can be with a free 6 month Spotify Premium subscription thrown in.

Anthem on Xbox One | £4.97 from Currys (save £25.02)
Jump into BioWare's online multiplayer adventure and get a 6 month Spotify Premium subscription while you're at it.

For just £4.97 you're getting the base game that will take you in the region of 20 hours to complete after you tackle the main campaign and explore all the vast world has to offer. And if that wasn't good enough, you also get a 6 month subscription to Spotify Premium thrown in, so you can jam to your favourite music as you play. And sure, maybe it's not the most polished game in the world, but you can have some fun with up to three pals and fly around safeguarding humanity together in your trusty Javelin suits. And if you don't have a friend that owns the game, buying two copies will cost you less than £10. Sorted.

The studio is currently invested in trying to improve Anthem, so as shaky as the game has been, now's the perfect time to snag yourself a copy for cheap and hopefully reap the rewards later when the improvements land. Recent news suggests Anthem will be overhauled in what is reportedly referred to as Anthem 2.0 or Anthem Next, which is said to change up and improve practically every inch of the online multiplayer game.

Looking for more great deals? We've got you covered with our Black Friday game deals 2019.