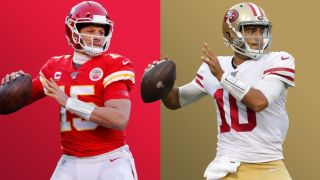 Super Bowl 2020 has been turned on its head with the Chiefs retaking the lead for the first time since the first half with just a few minutes remaining and then extending that lead with another touchdown with just over a minute left on the clock to win the game 20-31 and get their names onto the famous Vince Lombardi trophy. You're insanely late to the party, but there's still time to tune in and we'll tell you how to watch the Super Bowl live stream online for free if you'd like to catch the celebrations and post-game interviews and discussions.

We've got you covered if you'd prefer to watch on broadcast TV too as we'll tell you what the Super Bowl channels are in your country or what other options you might have around the world where you might need a VPN (it only takes a few minutes to set up). So get ready to enjoy the San Francisco 49ers Vs the Kansas City Chiefs as they duke it out for the Vince Lombardi trophy in the biggest sporting event of the year.

Luckily, while actually being in the stadium will leave your wallet empty, watching it from home doesn't have to be all that expensive with plenty of free viewing options and even ways of watching if you're on holiday when it airs.

And whether you're in it to see the Chief's strategic offense strategies bang heads with the 49ers' defensive plays, the halftime show or even just to catch the ads and trailers, a Super Bowl 2020 live stream will be just as action-packed as we've come to expect.

While it is hard to predict a winner, the pressure will be on for the Chiefs. Early estimations from bookies have them repping the higher odds with quarterback Patrick Mahomes riding strong after securing the MVP award, and performing an adrenaline-pumping 27-yard rushing touchdown.

Chiefs fan, 49ers devotee or lover of all things half time show - no matter what you're in it for, we've included all of the details of how to watch the Super Bowl 2020 online below.

If you're looking to upgrade your home entertainment center, you should also check out the ongoing Super Bowl TV deals. Yes, you've missed your chance to get it delivered in time for the game, but there's no excuse to miss out on those prices on some excellent 4K TVs.

For anyone trying to catch the Super Bowl in the States, Fox will be the place to go. For the first time ever, Fox will be offering the ability to watch the Super Bowl in 4K UHD (on compatible devices) for those who want to get the full experience of seeing these two giants of the NFL clash. There was an issue with Fox removing its app from Roku devices, but apparently the issue has been fixed now, but you might have to redownload the app first, so be sure to check before the game starts.

Pre-game coverage starts today on the Fox channel on the at 2pm ET, 11am PT and the actual kick-off will be 6.30pm ET, 3.30pm PT. While you can watch on the Fox app instead of your TV, you will need to be in the US to use the App. If you're away on holiday, you'll need to log in with a VPN.

Don't want to use Fox? A subscription to Hulu with live TV, YouTube TV or DirecTV Now will also get you access to the Super Bowl.

Live stream the Super Bowl 2020 from the UK:

Trying to catch the Super Bowl from the UK? Luckily, it's nice and easy with all of the action being aired for free on BBC One.

Simply head over to BBC One on your TV tonight at 11.25pm to see the full coverage of the Super Bowl 2020. You can also watch it live or on repeat through the BBC iPlayer app. Don't forget, kick-off is just five minutes later.

Just like with the US, if you happen to be living abroad or on holiday, you will have to adopt a VPN to catch the action.

See how to watch the Super Bowl 2020 online in Canada:

Canada's official Super Bowl 2020 broadcaster will be CTV/TSN. This makes life pretty easy for any Canadians, meaning you can just watch it live on TV or through the CTV Go app.

Obviously, if you don't have cable this leaves you a bit stuck but streaming service DAZN is there to help out. It offers 30-day free trials giving you the ability to watch the Super Bowl and then still catch a load of other sporting events before canceling (or finding your new favorite streaming service).

Live stream the Chiefs vs 49ers in Australia:

For anyone trying to watch the Super Bowl 2020 online from Australia, Channel 7 will be your safe haven. It's free-to-air and you can expect the action to kick off around 9.30am AEDT on Monday, February 3.

It will also be showing on Kayo Sport if you have a subscription set up or there is a 14 day free trial available, giving you plenty of time to watch the Super Bowl and cancel.

Watch the Super Bowl from elsewhere in the world:

Not living in any of the countries listed above? You are likely to find that most of these streaming services are geo-blocked while you're abroad, stopping you from accessing them. However, there is a solution - a VPN.

A VPN is a service that allows you to alter your IP address to appear like you're back home. That means you can appear to be back in the UK, the US, Canada, Australia or any country showing the Super Bowl and avoid those pesky geo-blocks.

Follow these simple steps to get set up within minutes to watch Super Bowl online:

2: Connect to a UK server
While you can connect to a server in any of the above countries and watch the Super Bowl like you're there, the UK will be the easiest thanks to step three below

3: Head over to TVPlayer.com
Once you're connected, tune in to TVPlayer. It's a free and legal online streaming service, which offers hundreds of channels. Among the channels, you'll find on offer at TVPlayer.com on offer is BBC One which will show the entire event live.

What channel is the Super Bowl on? That's the hot question on everybody's lips. Well, let's make sure you can avoid clicking through endless channels minutes before kick-off thanks to our handy list below. We've rounded up the confirmed Super Bowl channels for these countries around the world.

Depending on your country, you might find the Super Bowl channel-live stream is a standard free one, or you might have to be a signed-up paying subscriber. Again, this is where A VPN comes in handy as you can switch your device's location to a different nation.

What time is the Super Bowl?

It's today folks! In the US the big game kicks off at 6.30pm ET / 3.30pm PT / 5.30pm CT. UK viewers will appreciate the West Coast location this year and things will be getting underway at 11:30pm. In central Europe the game will begin at 12:30am. So while Europeans might be struggling to stay awake into the small hours, our Australian cousins can enjoy a handy 10:30am AEDT start (on February 3rd) - fingers crossed you've already booked the day off.

What time is the Super Bowl half time show?

Due to all the stoppages during an NFL game, it's almost impossible to predict the exact time, but if past seasons have been anything to go by, we'd expect it to begin roughly 90 minutes after the kick-off.

The half time show is much longer than the usual break in a regular-season game thanks to the live stage performances (it's Shakira and Jennifer Lopez this year). So half time in the Super Bowl can often last up to around 30 minutes.

If you need to grab a quick toilet break or prepare some more snacks, you'll have a few minutes to get sorted while the stage is prepared for the show.

What about the Super Bowl commercials?

The Super Bowl commercials are amongst the most-expensive slots in TV advertising and we expect this year to be packed with big ones. The upcoming US elections, video games, blockbuster movies, and more are all regular features in the most-watched sporting event in the world.

If you're watching from outside the US with local coverage in your own country (like the BBC in the UK), then chances are you won't see these commercials. If you're watching an American live stream though via a VPN (see above) then you can enjoy the full US experience.