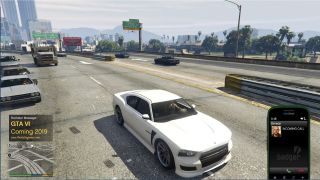 **UPDATE: Rockstar has confirmed that this was indeed the work of a mischievous modder. That means GTA 6 is, as expected, definitely not happening next year. Bah!**

"GTA VI Coming 2019": this is the message that has popped up across the screens of many a GTA Online player over the last few days and, naturally, people are confused.

Has Rockstar's chart-topping game just accidentally leaked its own sequel? Could it really be that GTA 6 is launching next year, in such close proximity to the release of Red Dead Redemption 2? Is a stealth announcement for the open world crime series imminent?  Sadly the answer to all of these questions is... probably not, but we can't completely rule anything out, given the apparent legitimacy of this new information. Let's break down the facts.

As games are integrated ever further into the online realm, it's common practice for a developer to populate its titles with mini commercials for upcoming sequels, and games have been leaked this way before, when said notification goes out ahead of the official announcement. Additionally, this GTA 6 ad isn't a contained issue, but multiple users have reported the pop-up as appearing in their game, across several platforms, with verified screenshots to boot. So, yeah, there's absolutely a chance, however small, that this is real, and a new Grand Theft Auto game is indeed out next year.

But that's a very glass half full outlook on the situation. For one thing, the only platforms where this notification is being reported is on PC, PS3, and Xbox 360, which are the only consoles where modding is currently available in GTA 5. With that in mind, this is very likely the work of a mean-spirited hacker, who has somehow managed to infiltrate people's games' with false promises of a non-existent sequel.

Think about it: since when has Rockstar ever released two of its titles so closely together? More importantly, why would it? GTA 5 is still selling like hot cakes, and Red Dead Redemption 2 will likely do the same, so both franchises need their breathing spaces in the market to keep flying off the shelves.

It takes, on average, several years for Rockstar to release a new game, so the idea that it would launch two within 12 to 15 months of each other sounds absurd. As much as I want to believe this one, it's 99% a false alarm.

That hasn't stopped sending the internet crazy with speculation, though, and understandably so. Even if it is a fake, it's a pretty convincing one, so no wonder GTA fans are being sent into meltdown. Whether GTA 6 is happening next year or not, we can hardly complain when the sequel to Red Dead Redemption is right around the corner, which is probably going to take us all at least two years to complete anyway. Best not to have your Rockstar cake and eat it, I say.

To tide you over until then, see which best open world games might be worth diving into this Summer.